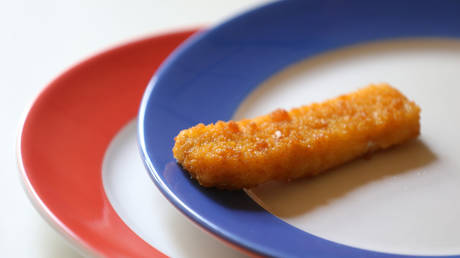 There may be many stinky things about fish sticks in school lunches, but CNN smelled President Donald Trump helping Russians, albeit “inadvertently.” Social media responded with some fishy, and hilarious, comments.

The report from last week conveyed the concerns of genuine Alaska pollock producers who said that about half of fish sticks in US school cafeterias are made from pollock caught by Russia that is processed and pumped with additives in China.

American fishermen have long been frustrated by this competition and hoped that Trump would solve this problem when he slapped Beijing with tariffs. But it turned out that the “confusing nomenclature and an arcane coding system” used by trade and customs officials to label goods saw no difference between who caught this type of fish and where, and still called it ‘Alaska Pollock’.


So the fish caught by Russians swam away from tariffs and stayed cheaper. The article details the efforts of legislators and lobbyists to fight the bureaucracy, but the intricate aspects of trade codes and slow movements of the Washington machine do not make good headlines like Trump and Russians do. And social media users were having a blast.

Some pointed out that mainstream media seeing Russkies under every bed has gone too far.

… I guess Mueller is going to have to investigate Trump for Fish Stick collusion.

Others felt that CNN should focus on how things work in Washington and criticized Trump’s actions.

Why are Russian fish sticks in our schools and not American products. That’s the story CNN.

How Trump’s trade war kept Russian fish sticks in US school lunchrooms – CNN Politics: Hey Alaska fishermen you voted for Trump like the rest of your state & he screwed You just like he did the farmers in KS, IN, WI, IA, TX, OH, & PA. Trumps a conman 😂😂 https://t.co/My5dYkZwf2

Some were a bit confused as school lunches are now strongly associated with Michelle Obama.

He “kept” them in…… so who put them in to begin with!? Wasn’t it Michelle Obama that took on school lunches!? 🤷🏼‍♀️ Honestly curious …

There were also some grammar nerds…

And those who just cringed at the memory of fish sticks from their childhood.