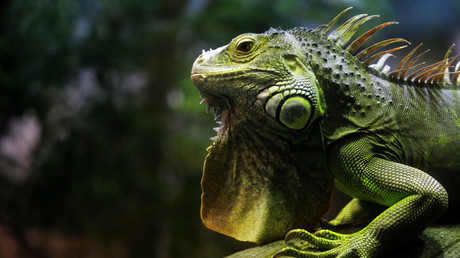 A highly charged confrontation between two large iguanas caused a mini traffic jam at a Starbucks in Boca Raton, Florida. But were the colorful animals fighting or mating?

Florida woman Shannon Moskoff witnessed the bizarre scene while on a morning coffee run with her friend. She came across the two extravagant-looking reptiles locked in a tight clinch on the road.

Video footage of the incident shows the iguanas grappling, circling and headbutting each other as the two women speculate about what exactly they are witnessing. “I’ve never seen this in my life,” one of the women says, “Are they stuck?”

As they try and decipher what’s going on one of the women exclaims: “Oh my god they’re eating each other.” When one of the iguanas breaks out of the other’s grasp one woman says “are they fighting or sexing? I can’t tell.”

“I think they’re trying to have sex,” her friend responds. They laugh as they consider what the iguanas are up to: “Spring has sprung.”

In another video explaining how the encounter unfolded Moskoff said that she was prompted to take out her phone and start recording after coming across the iguanas when one of the reptiles had the other one’s head in its mouth.

She added that she didn’t get to see how the face off ended because another car drove up behind her and she was causing delays.

While Moskoff and her friend had never encountered such a scene before it is becoming increasingly common as the iguana population of South Florida grows.

“There’s no real way to come up with a valid estimate of the number of green iguanas in Florida. But the number would be gigantic,” National Wildlife Research Center biologist Richard Engeman said to the Sun Sentinel. “You could put any number of zeros behind a number, and I would believe it.”