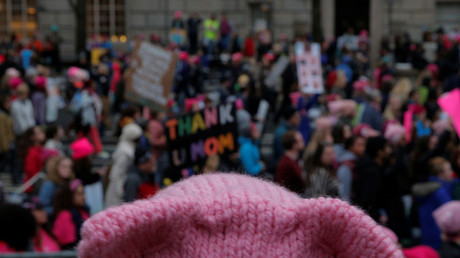 A group of prominent feminists is facing backlash over a letter they signed, defending an academic accused of sexual harassment because she is an “important figure” in feminist literary theory.

In what started off as humdrum ‘Me Too’ story with a twist –30-year-old male Ph.D. student accuses 66-year-old female New York University (NYU) professor of sexual harassment– has now reached peak internet gossip level, after 50 academics, including several influential feminists, defended the scholar.

The open letter from Butler, Spivak, Nancy, Zizek and co defending Avital Ronell is so chilling. A collection of critical scholars repeating all the standards lines usually used to defend Pogge, Dominguez, etc.

Avital Ronell, a world-renowned professor of German and comparative literature at New York University, was accused by a student, known only as ‘M’, who filed a complaint last September in NYU’s Title IX office – the department named after the civil rights law that prohibits discrimination on the basis of gender in federally funded educational institutions.

READ MORE: Going too far? Trudeau’s overly liberal course might do him a disservice

In May, colleagues of Ronell sent a letter to the NYU administration signed by a list of character witnesses, including about 50 intellectuals and many leading feminist theoreticians, who lambasted the accusation as a “witch hunt” and emphasised Ronell’s academic achievements. The letter says she is “the real victim in the story.”

Judith Butler, the influential philosopher and gender theorist, and philosopher Slavoj Zizek are among those who have reportedly signed their name to the letter, which described Ronell as someone whose “influence is felt throughout the humanities,” and the most “important figure in literary studies at New York University.”

Zizek, a cultural philosopher at the Institute for Sociology and Philosophy at the University of Ljubljana, responded to criticism and defended his signing of the letter by saying he knows the details of the “utterly ridiculous” accusations, which have so far been kept confidential.

The letter was made public by Brian Leiter, a professor of philosophy and law at the University of Chicago Law School, in a blog post he titled ‘Blaming the victim is apparently OK when the accused in a Title IX proceeding is a feminist literary theorist.’

Can fully support NYU due process, be WTF if that is the letter sent + still recognize BL hypocrisy. He is gunning for AR in a song that is familiar. @KathaPollitt might be just the one to spark a more aware conversation.

In the letter, Ronell’s colleagues also warned the administration that if she were to be terminated or relieved of her duties “the injustice would be widely recognized and opposed.”

“The ensuing loss for the humanities, for New York University, and for intellectual life during these times would be no less than enormous and would rightly invite widespread and intense public scrutiny,” the letter warned.

The group also urged the university to approach the case “with a clear understanding of the long history of her thoughtful and successive mentorship, the singular brilliance of this intellectual [and] the international reputation she has rightly earned as a stellar scholar in her field.”

Critics of the letter have dubbed this effort by the academic community, and feminists in particular, hypocritical for going against the ‘party line’, in which accusers should always be believed and the connections or achievements of the accused should be at least irrelevant, if not actually used as evidence of their power over the victim.