A Tesla-organized meeting has revealed a culture of sexual harassment and mistreatment by male managers, as described by female employees who attended. One women who had previously spoken about sexual harassment at Tesla was subsequently fired.

During the exchange attended by 70-100 people at Tesla’s Fremont factory, more than 20 women took the microphone and shared experiences of feeling unsafe, facing sexist remarks, subjected to unfair promotion decisions, being talked over in meetings, being catcalled, and the lack of women in leadership positions.

The disclosures from the March meeting have now been revealed in interviews with the Guardian published Wednesday.

One woman described parts of the factory as a “predator zone” for harassment.

Tesla has disputed the damning characterization at the meeting and countered that people shared both positive and negative experiences at the company. The ‘predator zone’ comment, however, prompted a factory-wide message to supervisors about its “strict policy against any kind of harassment.”

“Any complaints of catcalling in the factory are thoroughly investigated and action is taken where necessary,” stated Tesla.

Another of the women attending was AJ Vandermeyden, who had publicly accused Elon Musk’s company of sexual harassment and discrimination and sued in 2016. Shortly after the meet, Tesla fired Vandermeyden.

“It was finally giving women a venue to voice what was going on,” Vandermeyden told the Guardian. “It felt like Tesla had been saying I’m making all this up. And here were all the women saying,’ No, it’s happening.’ It is too big to deny.”

Vandermeyden said after she was hired in 2013, she was promoted to a manufacturing engineering position in a department mostly of men and where she was paid less than male engineers who work she directly supervised.

Men were allegedly granted positions over her and she and other women were denied promotions despite comparable or superior qualifications. She claims she was being targeted after complaining about sexual harassment and catcalls on the factory floor.

She went public with her complaint in February. Tesla denied her allegations, conducted an internal investigation and found no merit in her complaint. On May 23, Tesla hired a female to head HR and had her fire Vandermeyden.

“They just want to absolutely crush anyone who speaks up,” Vandermeyden told the Guardian. “I spoke up, and I was made a sacrificial lamb for it. It’s a scary precedent.” 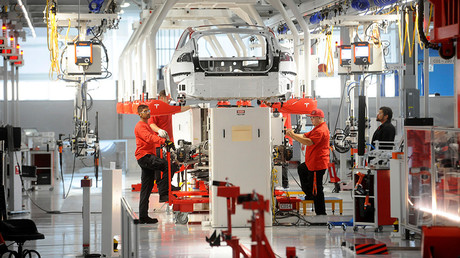 It is not the first time Tesla has been at the center of employee’s complaints. In February, Tesla worker Jose Moran publicly criticized the mandatory overtime regime, high rates of injury and low wages at the factory. Moran said his 5,000 coworkers often worked well over 40 hours a week, that machinery were not ergonomically compatible and that there was a constant push to meet production goals.

The Fremont car plant employs 10,000 workers and often requires mandatory overtime to meet the company’s projection to produce 500,000 electric cars by 2018, a 485 percent increase from 2016.

“I’ve seen people pass out, hit the floor like a pancake and smash their face open,” Jonathan Galescu, a production technician at Tesla, told the Guardian. “They just send us to work around him while he’s still laying on the floor.”

Several workers said they’ve seen co-workers collapse or be taken away in ambulances.

Women working in Silicon Valley, whether as company founders or rank-and-file employees, have long complained about sexism in the industry. More women have been speaking out recently about their experiences.

In February, a former Uber engineer Susan Fowler posted a personal blog about her experiences of sexual harassment and gender bias at the ride-sharing company.

That prompted an internal investigation into over 200 complaints that led to the resignation of its CEO, Travis Kalanick and the firing of 20 staffers.

On June 29, the New York Times ran a report on a female entrepreneur’s descriptions of sexual harassment by venture capitalists, such as Chris Sacca and Dave McClure. The following day, McClure stepped down to a diminished role at 500 Startups. On Saturday, McClure published a blog post admitted he had “made advances towards multiple women in work-related situations, where it was clearly inappropriate” and apologized for being “clueless, selfish, unapologetic and defensive”.

“To all those I let down, and especially to those I directly offended and hurt: I’m very sorry,” he said. “My behavior was inexcusable and wrong.” By Monday, he had left the firm altogether.

In an email to investors, obtained by the Financial Times, Christine Tsai, 500 Startups’ co-founder, said the firm’s management team had been “made aware of another sexual harassment report” against McClure and had asked him to resign.

In a Twitter post Monday, McClure said, “In best interest of @500Startups & at request [of] co-founder @christine_tsai, I am resigning effective immediately.”