Anti-Trump text messages he exchanged with Lisa Page were expressions of “deep patriotism” and not bias, FBI agent Peter Strzok told US Congress. He also claimed the hearing was a victory for Russian efforts to destroy America.

Strzok, the former deputy assistant director for counterintelligence of the FBI, faced the House Judiciary and Oversight committees on Thursday, to answer questions about his conduct during the 2016 investigations of Hillary Clinton and Donald Trump. He was a key member of both probes and even served on Special Counsel Robert Mueller’s team, until he was reassigned following the discovery of text messages between him and Page, a FBI attorney who has since resigned. 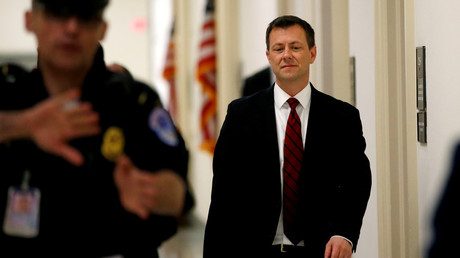 Strzok maintained that the text messages between him and Page were rooted in “deep patriotism” and “not indicative of bias.” In his opening remarks, he said he was “particularly proud” of his work on the Clinton email investigation.

“I have the utmost respect for Congress’s oversight role, but I strongly believe today’s hearing is just another victory notch in Putin’s belt and another milestone in our enemies’ campaign to tear America apart,” he said. “As someone who loves this country and cherishes its ideals, it’s profoundly painful to watch and even worse to play a part in.”

This sentiment was echoed by numerous Democrats. Luis Gutierrez (D-Illinois) at one point declared that “they’ve got to be overjoyed at the Kremlin.”

The marathon hearing split along partisan lines from the very beginning, with the Democrat minority interrupting the Republicans’ questioning with repeated procedural interventions and points of order, and at one point bursting into applause at an answer from Strzok.

Representatives Trey Gowdy (R-South Carolina) and Jim Jordan (R-Ohio) zeroed in on the content of texts and emails between Strzok and Page, including the August 2016 exchange in which Page seeks reassurance Trump is “not ever going to become president, right? Right?!”

On Thursday, he categorically denied this meant bias or hinted at any action by him or Page. Rather, he argued, it was late at night, he doesn’t remember writing that message and, in any case, what he really meant was more of a general sense the American people wouldn’t vote for someone like Trump.

This led to a notable clash with Gowdy, one of many over the course of the hearing.

“I don’t give a damn what you appreciate, Agent Strzok,” Gowdy replied. “I don’t appreciate having an FBI agent with unprecedented level of animus working on two major investigations in 2016.”

Strzok repeatedly denied that he or any other FBI agents let any personal political opinions turn into bias that would affect their job, and that the DOJ inspector-general’s report, released last month, confirmed that as well.

At one point, however, Rep. Raul Labrador (R-Idaho) quoted from the IG report, which said the investigators “did not have confidence” that a specific decision by Strzok to prioritize the Russia investigation over new evidence in the Clinton probe “was free from bias.” Strzok dismissed that as “hedging phrases” and insisted he did everything correctly in that instance.

What’s mostly educational about this hearing is not the grandstanding of the Q&A but the smug arrogance and mind-blowingly implausible — almost insane — explanations of Strzok. This is not a man who shows even-handedness or good judgment. Or even a strong handle on reality.

Strzok also testified that his security clearance has not been revoked, and that he still has Top Secret access. Attorney General Jeff Sessions had said in an interview last month that Strzok had been stripped of his clearance, “as I understand.”

One of the most dramatic moments came when Rep. Louie Gohmert (R-Texas) accused Strzok of outright lying, bringing up the issue of the agent’s extramarital affair with Page that had been tacitly ignored up to that point.

“I can’t help but wonder when I see you looking there with a little smirk; how many times did you look so innocent into your wife’s eyes and lie to her about Lisa Page,” Gohmert told Strzok, over the shouted objections from Democrats.