Daniels (real name Stephanie Clifford) claims to have had an affair with Trump a decade ago, and was paid $130,000 in the weeks before the 2016 election to keep quiet about it. Asked about the payment and the reported non-disclosure agreement Daniels had signed (but Trump had not), the president said he had no knowledge of it.

Federal prosecutors in New York are investigating Cohen for possible bank fraud over the payment, according to The New York Times.

“It’s a disgraceful situation. It’s a total witch hunt,” Trump said on Monday evening, commenting on the news about the raid. “They raided the office of a personal attorney early in the morning. It’s a disgrace.” 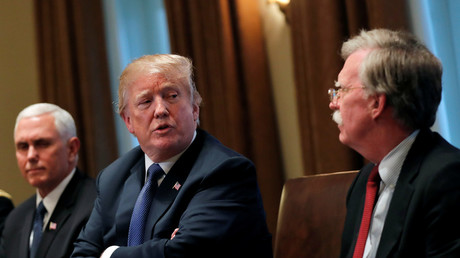 Trump was in a meeting with Cabinet officials and national security staff over possible US action in Syria in response to the alleged chemical attack on Douma, a suburb of Damascus held until recently by Jaysh al-Islam (Army of Islam) militants.

Questions about the raid on Cohen and Special Counsel Robert Mueller’s investigation took up most of the time at the press pool, however. Trump expressed frustration about the “witch hunt” that has been going on since before he was inaugurated.

“This is the most biased group of people. These people have the biggest conflicts of interest I have ever seen. Democrats all. Either Democrats or a couple of Republicans who worked for President Obama,” he said, accusing the staff working for Mueller of not looking at the wrongdoing under his predecessor.

“We’ve had that hanging over us from the very, very beginning. And yet the other side they’re not even looking. And the other side is where there are crimes and those crimes are obvious – lies under oath all over the place, emails that are knocked out, that are acid-washed and deleted, 33,000 emails were deleted after getting a subpoena from Congress. And nobody bothers looking at that,” Trump said.

Trump’s election rival Hillary Clinton was under FBI investigation in 2016 for using a privately owned email server to conduct official business while she was secretary of state, during Barack Obama’s first presidential term. Recent revelations show the FBI had drafted her exoneration months before Clinton was actually interviewed on the July 4 weekend. FBI Director James Comey took the unprecedented step of announcing there would be no charges against Clinton in a public press conference shortly thereafter.

Right around that time Clinton accused Trump of “colluding” with Russia to win the election. Her campaign continued to accuse Trump of being a “puppet” of Russian President Vladimir Putin in the months preceding the November 2016 vote, and doubled down on the claims after Clinton lost the election.

Mueller was appointed special counsel after Trump fired Comey in May 2017, citing his conduct in the Clinton email probe among the reasons.