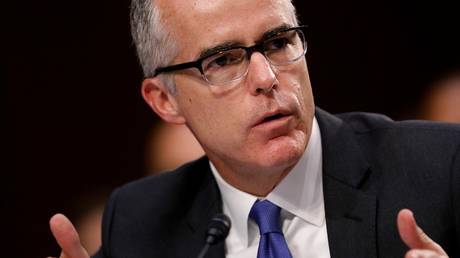 Former deputy head of the FBI Andrew McCabe is back in the headlines, claiming US President Donald Trump was somehow doing Russia’s bidding – and having the press eating from his hand and promoting his book.

McCabe, who was deputy director of the FBI under James Comey and acting director from May to August 2017, is hitting the networks to flog his book about how Trump represents a “Threat” to everything American, attempting to justify discussing a bureaucratic coup against the president and a FBI investigation of his campaign.

Among his claims is that Trump refused to listen to US intelligence chiefs on North Korea, saying “I don’t care, I believe Putin” instead. The same Trump who threatened Pyongyang with “fire and fury?”

“McCabe is rightly perceived already as a lying buffoon, with a major set of conflicts of interest,” political analyst Charles Ortel told RT.

While many mainstream outlets are buying McCabe’s tall tales hook, line and sinker, they neglect to mention he was fired from the FBI for leaking to the media, then lying about it to investigators multiple times, under oath.

RT’s Murad Gazdiev has the story.