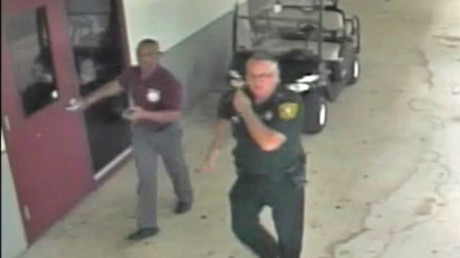 The father of a student killed in Florida’s Stoneman Douglas High School shooting has filed a wrongful death lawsuit against a former deputy sheriff who he has accused of failing to confront the shooter and labelled a “coward”.

Andrew Pollack filed the lawsuit on behalf of his late daughter Meadow, who was one of the 17 people killed by Nikolas Cruz at the high school in Parkland, Florida on February 14.

It accuses former Broward Sheriff Deputy Scot Peterson of failing to enter the building during the shooting. Peterson was on duty as armed resource officer at the school during the attack.

“Confucius perfectly sums up Scot Peterson’s conduct on February 14, 2018: ‘To know what is right and not do it is the worst cowardice.’ Scot Peterson is a coward,” the suit reads.

Peterson resigned in the aftermath of the shooting rather than face suspension after an internal investigation was launched, Reuters reports. Broward County Sheriff Scott Israel said that Peterson should have entered the school and confronted Cruz.

Peterson faced a huge public backlash after it emerged that he remained outside the school, and even US President Donald Trump weighed in, saying he was either a coward or he froze under pressure.

“That’s a case where somebody was outside, they’re trained, they didn’t act properly or under pressure or they were a coward. It was a real shock to the police department,” Trump said.

Peterson’s lawyer Joseph DiRuzzo told the Herald Sun newspaper in February his client had acted appropriately, based on the belief that gunshots were coming from outside the school.

Nikolas Cruz, the estate of Cruz’s late mother, a couple who housed Cruz in the time immediately before the massacre and three mental health centers that evaluated and treated Cruz have also been listed in the lawsuit.

The suit claims that the defendants failed to prevent the shooting. It seeks a jury trial and an unspecified amount of damages.