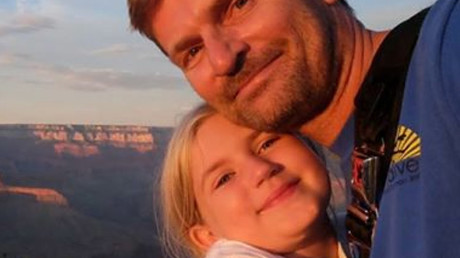 A father and his young daughter claim they were terrorized by a highway patrolman in Arizona while they were en route to the Grand Canyon on Friday.

Ken Walton, who is from California, described the horrifying ordeal in a lengthy Facebook post where he and his 7-year-old daughter were held at gunpoint after being pulled over by the out-of-control highway patrolman.

“Tonight, I was arrested at gunpoint by an Arizona highway patrol officer who threatened to shot me in the back (twice) in front of my 7-year-old daughter. For a moment, I was certain he was going to kill me for no reason,” he wrote.

Walton had been making his way to the Grand Canyon in a rented car when he was pulled over by the Arizona Highway Patrol who had been tailing him for a few miles.

“I hadn’t been speeding so I wondered if perhaps the car had a broken taillight or something. I rolled down my window and waited,” he said.

Rather than approach the driver’s side, the officer instead “rapped on the rear passenger side window with his pistol.”

His daughter who was “sitting inches from the barrel of his gun, jumped with fear as the officer yelled at me to roll down the front passenger window, his service weapon pointed directly at me.”

While the police officer continued to shout orders, the young passenger panicked and attempted to get out of her booster seat to roll down the front window. It was at this point that the agitated officer screamed at her and pointed his gun at her.

Walton said he then exited the car he assumed the position to be arrested at gunpoint.

“Then, as I had my hands in the air, he yelled, at the top of his lungs in a voice I will never forget, as my daughter looked on in terror, ‘Get your hands away from your waist or I’ll blow two holes through your back right now!”

The father said he was “utterly terrified,” at this stage. “I’ve heard stories of police yelling out false things like this before they unjustifiably attack someone as a way to justify the attack and I thought this was what was happening to me. I braced for bullets to hit me and all I could think of was my daughter having to watch it happen and being left alone on the side of the highway with an insane, violent cop.”

After being arrested, he was placed in the back of the police car and Walton then confronted the officer for threatening to kill him. He also got the patrolman’s name – Oton Villegas – and his badge number.

“He stood by his story that I had made a threatening movement toward my waist, and I said it wasn’t true, and he said this wasn’t the place to discuss it. He let me go attend to my daughter but continued to ‘detain’ us for another 20 minutes as he talked to his supervisors, presumably plotting damage control.”

The dad is now deciding on if he will take legal action, but added that his daughter was “thoroughly traumatized by the event.”

In March, a police officer was charged with second-degree murder after shooting dead an unarmed 26-year-old man in Arizona.

Body camera footage of the incident, which took place in January, confirmed the victim, Daniel Shaver, pleading with the officer not to shoot him as he crawled along the hallway outside his room at the La Quinta Inn in Mesa.