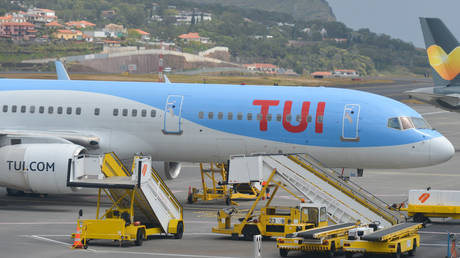 Airlines are known to charge for extras, but one UK family got much less than they expected when the seats they purchased turned out to be non-existent. The airline, now under scrutiny, made them sit on the floor for their flight.

When Paula Taylor, along with her husband Ian and daughter Brooke boarded a TUI flight in June to return home to Birmingham from the popular holiday destination of Menorca, they didn’t expect their £1,300 flight to be quite so “economy.”


Despite having boarding passes for seats 41 D, E and F on the plane, the Taylors were shocked to discover nothing but an empty space under the numbers for where their seats should have been.

“We all just looked at each other as if to say ‘where’s our seats gone?’,” Mrs Taylor told BBC One’s consumer watchdog show, Rip-Off Britain: Holidays.

While cabin crew were able to give Brooke the last remaining free seat for take-off, both Mr and Mrs Taylor were required to use to use spare fold-away “jump” seats reserved for staff.

Worse still, after take-off the Taylors were then asked by crew to sit on the floor where their seats should have been as they were blocking access to snacks and other duty-free items. Not wanting to be on her own, daughter Brooke joined her parents to sit on the floor.

Describing her time on the floor as an experience she would never wish to repeat, Mrs Taylor said: “It’s hard and it’s uncomfortable and it’s just filthy.”

However, when she complained about the incident to TUI immediately after the flight, the airline informed Taylor that no record of the incident was available, despite being presented with photographic evidence.

Complaining that the airline had given her “short shrift” – offering a meager £30 “good-will gesture” instead of a full refund – Taylor then contacted Rip-Off Britain.

The show, which airs later this week, then got in touch with the airline. The latter blamed the incident on a “last minute aircraft change” and said they would be refunding the Taylors for the full amount and contacting them with a full apology.

Speaking to the BBC, the Civil Aviation Authority (CAA) said that while passengers may be allowed to use jump seats under certain conditions, they must never be unseated for the entire flight. It is now looking into the incident, the channel said.