After describing himself as Facebook’s “best client” in Brussels, MEP Nigel Farage accused its CEO Mark Zuckerberg of “wilfully discriminating against” right-wing political opinions on the platform.

Farage queried Zuckerberg as the social media mogul answered questions at the European Parliament on his company’s privacy and data policies in the wake of the Cambridge Analytica data sharing scandal.

Challenging the claim previously made by Zuckerberg to Congress that Facebook is a “platform for all ideas,” Farage said that since January, Facebook had “changed its modus operandi, you’ve changed your algorithms,” to affect views and engagement on pages with a right-wing political view.

According to Farage, this has led to “a very substantial drop in views and engagements for those that have right of center political opinions.” 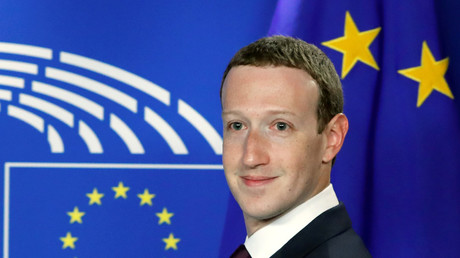 Quoting a drop in social media engagements on the pages of US President Donald Trump as well as his own page and other conservative political commentators, Farage said that “on average, our numbers are down about 25 percent over the course of this year.”

The MEP for South East England asked about those “third party fact checkers” who assess and remove content reported on the platform. “Why is there no transparency in this process at all?”

Zuckerberg responded to the questions by MEPs by repeating his assertion that the company was “committed to being a platform for all ideas.”

“It’s very important to me that we’re a service that allows for a wide variety of political discourse,” Zuckerberg said. “It’s an important philosophical point” that the company had never and will never assess what content is on the site or how the ranking is determined “on the basis of political orientations,” he went on.

Zuckerberg’s questioning in front of the EU Parliament has already come under scrutiny for the format of the session as well as the vast number of unanswered questions left.

Damian Collins, the British MP who chairs the Commons Digital, Culture, Media and Sport select committee called the session “a missed opportunity,” saying the format led to “no real scrutiny.”

Today’s session in the EP was a missed opportunity. An hour of questions, followed by a lengthy statement from Zuckerberg, with all difficult questions dodged. The format, which was agreed by Facebook, led to no real scrutiny. It is time that he appeared in front of @CommonsCMS

A request for Zuckerberg to appear in front of the DCMS committee was previously rejected by the CEO.