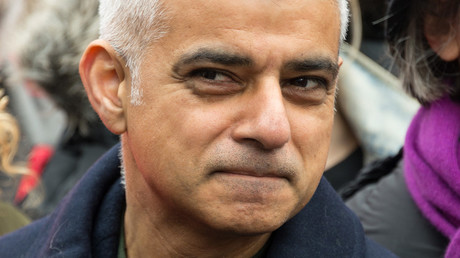 Former Ukip leader Nigel Farage has hit out at London Mayor Sadiq Khan saying London’s shocking spate of murders is his ‘mess’. It comes as Khan faces severe criticism over his response.

Just as news emerges of another six teenagers being stabbed in London on Thursday, Farage tweeeted:

He was among the MPs, journalists, and public slamming the mayor for failing to do enough to tackle violent knife and gun crime in the capital, which has already claimed the lives of 50 people in 2018. The spate of attacks saw London’s murder rate overtake New York’s in February and March.

The mayor came under fire after he said during an LBC interview on Thursday that he still had not visited the families of the victims at the scene of the attacks.

READ MORE: With 50 killed in London this year, RT asks the public whether they feel safe (VIDEO)

High-profile Labour MP for Tottenham David Lammy spearheaded criticism against Khan, as well as Home Secretary Amber Rudd, as he accused them of not visiting crime-hit constituencies sooner. A wave of criticism also poured in through social media. LBC presenter Andrew Pierce said: “50 murder victims in London already this year & deafening silence from Labour Mayor @SadiqKhan who is crime commissioner.”

Tory political commentator Alex Deane said: “I think that Sadiq Khan has just forgotten that he’s Mayor of London. Fair play, could happen to any of us.”

The public joined the backlash as Twitterati called on Khan to resign.

Well he’s too busy banging on about Trump and visiting his Motherland at the UK taxpayers expense to do his job- he’s full of arrogance & if he goes for Labour leadership, the UK’S stuffed @SadiqKhanhttps://t.co/xPAfhDCS1o

You need to resign, you should of been all over this at the start of the week, instead we have not heard from you till the pressure was on. Your not fit for office and it is showing now.

At least we’re more aware of gender neutrals even though people are dying in our capital every day. Cheers mate @SadiqKhan

@SadiqKhan is just content to blame others for his failings. He went to the USA 2.wks ago on tax payers money to talk about online abuse. The is all he’s bothered about and the islamification of Londonistan. Sharp hurty words don’t hurt. Sharp knives do.

But there were also those who ran to Khan’s defense.

It’s not @SadiqKhan that’s responsible for cuts to police. We need radical change in govt policy and the political will to tackle crime in London and across the country. https://t.co/8cVtP0jZgi

People need to stop blaming Sadiq Khan for what’s going on in London. He doesn’t control the budget for the police or services for the youth. The blame needs to be placed with the Tories in particular Theresa May who have been making these cuts.

What does @SadiqKhan has to do with the stabbing. Is he the one selling drugs on the steeet. The Scotland Yard should be more equipped with funds to track down gangs