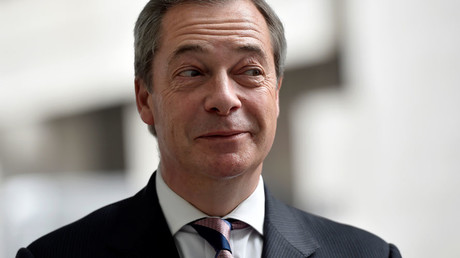 Speaking on Fox & Friends on Thursday morning, Farage argued that UK Prime Minister Theresa May was keen to emphasize the attacker’s British nationality to detract from immigration-fostered radicalization.

“[The government] will always try to emphasize that because they are so embarrassed about their immigration policies,” the UKIP MEP said.

“Look the point is that we do have radicalization going on inside our country. Some of it is going on in state-run schools and state-run prisons, and that is something I think we really could deal with.”

The right-wing politician used the opportunity to argue that most people in Europe wanted “a total end to all Muslim immigration.”

In another Fox interview, Farage said: “The idea that this whole country is united, which is what we are hearing from our leaders, I’m not sure is true.

“We’ve made some terrible mistakes in this country, and it really started with the election of Tony Blair back in 1997, who said he wanted to build a multicultural Britain. His government even said they sent out search parties to find immigrants from all over the world to come into Britain.

“Do you know what? I don’t think we vetted a single one of them.”

He then added that there was now “a fifth column” in Europe, caused by “multiculturalism” dividing communities.

But his comments were seen as tactless after two of the victims pronounced dead were found to be American tourist Kurt Cochra and Spanish teacher Aysha Frade, who lived and worked in London.

A further 14 of the 26 people injured in the incident were also identified as foreign citizens, including 29-year-old Romanian Andreea Cristea, who is now in critical condition. Other foreign victims were Cristea’s fiancé, Andrei Burnaz, three French children on a school trip, another US citizen, one German, one Pole, four South Koreans, an Italian, two Greeks, an Irish and a Chinese person.

“Goes without saying that Katie Hopkins and Nigel Farage are not patriots & live in a parallel country to the generous & kind one we saw [yesterday],” Open Labour editor Jade Azim tweeted.

Nigel Farage is 52 and from Kent. So is the alleged Westminster attacker. When will we tackle this problem of 52-year-olds from Kent?

A Twitter user under the name Ayah Al-Zagha pointed out that much like the recently named attacker, Khalid Masood, Nigel Farage is also from Kent – mocking that the Ukipper could also have been radicalized.

Likes of Farage are useful idiots doing the terrorists’ work for them. Seeking to divide people based on religion, race or origin is sick

Hopkins, Farage and Co despise London because it is living, breathing, proof that everything they stand for is abundantly false.

Farage was not the only one making a point against the ethnic diversity of British society. Daily Mail columnist Katie Hopkins echoed the sentiment when having her own turn to speak on Fox News.

If it was up to me I’d take Hopkins and Farage’s British passports away and tell them to fuck off.

“Great Britain is more disunited – it is absolutely divided, more than any time in its past, and we are in fact a nation of ghettos,” she said.

“I think liberals here actually think multiculturalism means we all die together, and that’s not a view I support.”