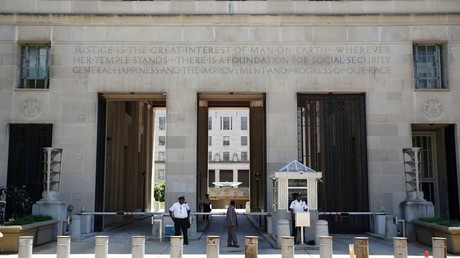 Department of Justice staff had to “shelter in place” after reports of an active shooter at Pennsylvania Avenue. Washington, DC Metropolitan Police sweeped the building for a shooter.

The all-clear was given shortly before 5:00 pm local time, police confirmed to local media. No shooter was found. The report was not made from inside the DOJ but by a “third party,” police said.

The DOJ building is right across the street from the FBI headquarters.

The incident happened just hours after Attorney General Jeff Sessions announced a change to the asylum policy, which would see domestic and gang violence no longer serving as grounds for being granted sanctuary in the US.

“Generally, claims by aliens pertaining to domestic violence or gang violence perpetrated by non-governmental actors will not qualify for asylum,” Sessions wrote in his ruling on Monday. “The mere fact that a country may have problems effectively policing certain crimes — such as domestic violence or gang violence — or that certain populations are more likely to be victims of crime, cannot itself establish an asylum claim.”

The decision involved a case of a victim of domestic violence from El Salvador. It overturns a 2014 ruling by the Board of Immigration Appeals, which held that domestic violence victims from Central American countries could qualify for asylum in the US. The AG’s ruling serves as a binding precedent for immigration judges.

Migrants from Central America have been bypassing the Trump administration’s efforts to stop illegal crossings on the southern border by laying claim to asylum based on “credible fear” of returning to their home countries, often citing domestic abuse or violence by gangs such as MS-13.