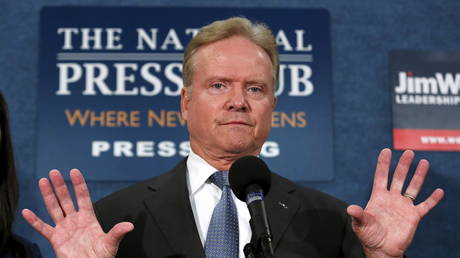 US President Donald Trump has dismissed reports that he is considering making former Democratic senator Jim Webb the new head of the Pentagon as “fake news”, tweeting that Acting Secretary Patrick Shanahan “is doing a great job.”

In a tweet on Friday, Trump lashed out at the New York Times, which had reported earlier that the commander-in-chief was eyeing one-term Virginia senator and outspoken opponent of the Iraq war for Defense Secretary.

“The story in the New York Times regarding Jim Webb being considered as the next Secretary of Defense is FAKE NEWS,” Trump tweeted.

“I’m sure he is a fine man, but I don’t know Jim, and never met him,” Trump added, while praising Shanahan, the Deputy Secretary of Defense and former aerospace executive with no military experience, who temporary replaced Jim Mattis after his December ouster.

The story in the New York Times regarding Jim Webb being considered as the next Secretary of Defense is FAKE NEWS. I’m sure he is a fine man, but I don’t know Jim, and never met him. Patrick Shanahan, who is Acting Secretary of Defense, is doing a great job!

Webb, a Vietnam war veteran, is known for his aversion to protracted US military campaigns in the Middle East and a hawkish stance on China. He served as assistance Defense Secretary under President Ronald Reagan. Webb also briefly ran in a Democratic primary ahead of the 2016 presidential elections, but quit the race after falling out with mainstream Democrats.

Also on rt.com
Mattis to leave on Jan 1, deputy Shanahan to replace him as acting defense secretary – Trump


Mattis resigned last month after Trump unveiled his plan to withdraw forces from Syria, declaring a victory over Islamic State (IS, formerly ISIS/ISIL) there. In his resignation letter, Mattis cited differences in views with his former boss. While Mattis initially planned to stay on as the Pentagon chief until February to provide for a smooth transition, Trump made him leave by January, appointing “very talented” Shanahan in his place.

There have been speculations that Shanahan may have to sit in for Defense Secretary longer than expected and possibly take over the job.

Lacking any military background, Shanahan spent over three decades working at Boeing and was Director of Airplane Programs before taking up a career in the Trump administration.