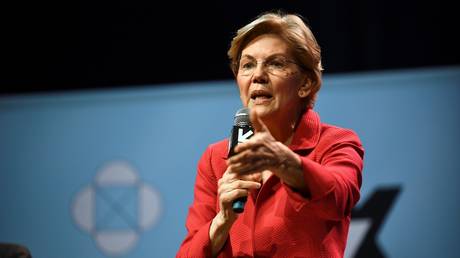 Democratic presidential hopeful Elizabeth Warren might have felt vindicated in her crusade against the monopoly of tech giants like Facebook and Google, after the former took down her ads calling for their dismemberment.

Warren made a full-blown offensive against a number of the most prominent digital giants a key part of her 2020 campaign agenda. Blasting the vast power that conglomerates such as Google, Facebook, Amazon and Apple have accumulated, Warren has unveiled plans to “unwind tech mergers” by introducing legislation that would bar the platforms from offering a marketplace and selling their services on that same marketplace.


That, however, did not stop Warren from using the platform provided by one of her adversaries, Facebook, to place her campaign ad urging her supporters to join her quest in disbanding it, along with Amazon and Google.

“It’s time to break up Amazon, Google and Facebook,” the ad reads, then links to a petition with an extensive follow-up. The ad, apparently and understandably, did not sit well with someone at Facebook, however, with Politico reporting that three such ads were unavailable as of Sunday morning.

Facebook, Amazon, and Google have vast power over our economy and democracy. They’ve bulldozed competition and tilted the playing field in their favor. Time to break up these companies so they don’t have so much power over everyone else. #BreakUpBigTechhttps://t.co/2rWT0wJ8vD

“This ad was taken down because it goes against Facebook’s advertising policies,” the message replacing the ads reportedly read.

Facebook has confirmed that it did take down Warren’s ads, but not out of vengeance, as some might have suggested, but because the taunting advertisements violated its policies against the usage of its brand, it claimed.

BuzzFeedNews reported that Facebook removed ads that were featuring a video with a thumbnail image of a Facebook logo.

The reported censure was, however, short-lived, with the spokesman saying that it decided to overlook its own guidelines for the sake of freedom of speech.

Facebook’s volte face came in handy for Warren, who immediately used it as a case in point.

Curious why I think FB has too much power? Let’s start with their ability to shut down a debate over whether FB has too much power. Thanks for restoring my posts. But I want a social media marketplace that isn’t dominated by a single censor. #BreakUpBigTechhttps://t.co/UPS6dozOxn