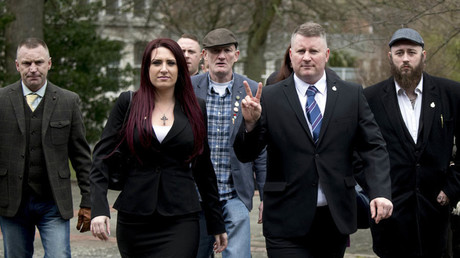 Facebook has banned Britain First (BF) leaders from using its platform, just days after the group’s leaders, Paul Golding and Jayda Fransen, were jailed for a series of hate crimes committed against Muslims.

The social media giant said it issued warnings to Golding and Fransen who were imprisoned last week for 18 and 36 weeks, respectively. Facebook said both had recently been given “a written final warning,” but “they have continued to post content that violates our community standards.” Now, Britain First’s Facebook page, which had two million followers globally, has been closed.

Facebook stated: “We do not do this lightly, but they have repeatedly posted content designed to incite animosity and hatred against minority groups, which disqualifies the pages from our service.”

Facebook said the group’s violation of their rules included a picture that compared Muslim immigrants with animals. The group also reportedly uploaded an image stating the leaders of the group were “Islamaphobic and Proud.”

Last week, Golding, 36, and Fransen, 32, were found guilty of religiously aggravated harassment. Facebook added: “We are an open platform for all ideas and political speech goes to the heart of free expression. But political views can and should be expressed without hate.”

“People can express robust and controversial opinions without needing to denigrate others on the basis of who they are. There are times though when legitimate political speech crosses the line and becomes hate speech designed to stir up hatred against groups in our society.”

Twitter erupted into a war of words as fans said free speech is being violated – and others backed the move.

Britain First has been removed from facebook, so now your racist auntie’s facebook page is just pictures of her sad looking dog.

Facebook are taking down the pages of Britain First & its leaders which have been used to draw hundreds of thousands of people to racist propaganda. A significant step

Nice to know your freedom of speech and association principles are still intact, Nick. We need staunch defenders of fundamental human rights like you in the media.

I don’t agree Nick. Life is all about balance, and whilst they do talk some garbage, the bedrock of many of their arguments are worth noting and discussing. The moment we close people like this down, the less likely we are to stop Telford, Rotherham and Rochdale happening again

So you think they were wrong to oppose radical Islam . Genuine question. Do you think no one should be allowed to speak about Islamic terrorism or oppose it being in Britain ?

That ban came after President Donald Trump seemed to endorse the group by sharing Islamophobic videos. The president subsequently said he was willing to apologize for seemingly endorsing the group.

There is no right to freedom of speech in the UK. The country does not have a written constitution and has laws against hate speech and libel. Despite this, the right to free speech is supported by the European Convention on Human Rights, an organization the UK seems set to leave following Brexit.