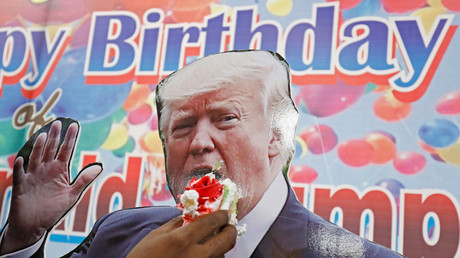 The ICYMI team took to the streets of London to ask Brits and visitors in the capital if they had any birthday messages they would like to deliver to Donald Trump. Among the expletives, there was one fan of the US president.

It’s fair to say that “The Donald” was sent less than flattering messages of birthday cheer in London town on the day he reached the grand old age of 72.

After an avalanche of short, sharp messages urging the president to – putting it kindly – go away, there was an Eminem wannabe looking to start a dazzling new career as a rapper who dedicated a massive ‘shout out’ to Trump, singing/shouting: “F**k the Trump… what else? Yo Trump. Are you going to see this? Yo Trump, f**k off.”

However, a compatriot of Trump was gushing about the qualities of the birthday boy and was more than happy to send the US president a happy birthday message, insisting:
“I love the guy, he’s great. He’s not the status quo. We’ve done that in our country for too long. He’s the other side. He’s different.”

He added: “He’s in your face, he’s brash and he gets the job done. We’ve had all of these politicians both Democrat and Republican pandering to their bases and that’s not going to get the job done. I just love him. I love the guy.”