Journalist Michael Segalov is to sue the police over claims he’s a left-wing extremist that could have disrupted the Labour Party conference last September – an event for which police refused to grant him security clearance.

Legal papers, which police were compelled to disclose after Segalov filed a legal claim in the high court, show that the Huck Magazine news editor and Guardian contributor was denied entry to Labour’s conference as they claimed “Segalov was a known extreme activist who had taken part in demonstrations in relation to a wide range of issues.”

Detailing the alleged risk Segalov posed to the Labour party’s main annual event, police claim the journalist is a “known extreme left wing (XLW) activist” who “might get involved in actions that would disrupt the conference.”

The police have labelled me an extremist and banned me from doing my job as a journalist, despite never breaking the law. It’s an incredibly worrying situation, so this week I’ve been forced to take them to court. Me for @guardian. https://t.co/NQBSrn8EtX

Responding to police claims and the impending legal case, Segalov has said that “this is an important case to determine how the press can operate freely. To be labelled an extremist for carrying out my work as a journalist is incredibly distressing.”

The focus of police intelligence on Segalov appears to center on a ‘direct action’ anti-deportation protest at a Byron Burger restaurant in 2016, that he was covering as a journalist. The protesters released cockroaches into the restaurant. 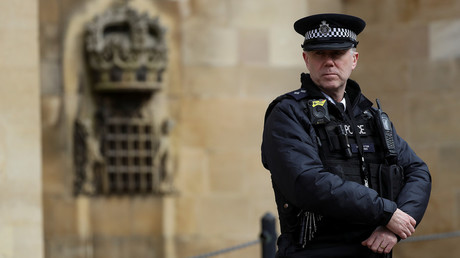 Recalling the event in his Guardian column, Segalov says: “I received a text message from an unknown source – a tipoff – and so I headed down to a central London location with a photographer, not entirely sure what to expect. In response to immigration raids at the Byron Burger chain, I watched as bugs were let loose by activists in one of their branches. I filed my story, and gave it little more thought.”

Segalov claims police have concluded that his mere presence at the protest shows that he was “involved” in the action, a charge he strenuously denies. He writes: “They say that by reporting on a story I indicate I think it is ‘acceptable,’ because I chose not to ‘intervene or walk away’.”

In another example, police cite damage caused to Sussex University during a protest in 2013, claiming Segalov had “expressed his satisfaction” at such action – all the while making it clear they are not accusing him of partaking in any criminal activity, reports The Guardian.

Segalov won £20,000 ($27,000) and an apology from Sussex University after they wrongly accused him of being involved in criminal behavior during the 2013 protest.

We’re acting for @MikeSegalov with Jude Bunting of @DoughtyStPublic in this really important case about police regulating press freedom. The police have been secretly vetting journo’s on the basis of an undisclosed policy with an unfair process. In the RCJ on Wed for permission. https://t.co/TJnOmPtesc

At Wednesday’s hearing, Segalov’s lawyers are hoping to convince the high court to allow his case against Sussex and Greater Manchester police to go ahead.