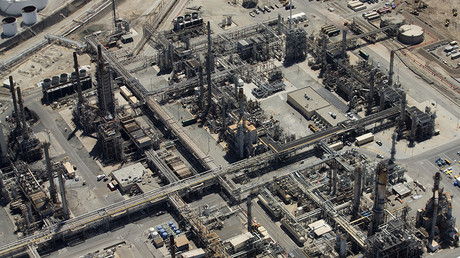 An explosion at an oil refinery in Los Angeles sent a cloud of chemicals, including sulfur, into the air. No injuries were reported, but members of the public were advised to stay indoors as a precaution.

The blast took place on Friday afternoon when a sulfur tanks exploded at the Tesoro Refinery in the suburb of Carson.

Inspector Gustavo Medina of the Los Angeles County Fire Department said that the one-ton lid of the tank “blew off,” while adding that the cause of the fire is unknown and is being investigated, the Los Angeles Times reported.

Although fire crews managed to put out the blaze quickly, a cloud of steam continued to pour into the air for the next few hours.

“We are currently conducting air quality monitoring around the site,” company spokesman Destin Singleton said, adding “at this time we have not detected any harmful levels of toxins,” according to AP.

The Los Angeles County Fire Department sent in a hazardous materials team. Local residents were allowed to leave their homes in the early evening.

The facility, the largest of its kind in California, produces gasoline, jet fuel, diesel and other fuels.