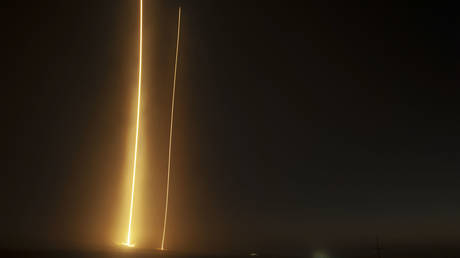 The Pentagon wants $300 million to experiment with a space-based direct energy weapon for intercepting ballistic missiles – but the request may be deliberate misinformation, in the spirit of the Reagan-era ‘Star Wars’ program.

The US military has vowed to boost its space infrastructure, keeping ahead of Russia and China as they develop anti-satellite capabilities. Most of Washington’s effort is to provide more redundancy and to ensure that, if either of the two adversary nations were to start shooting down American satellites, enough would remain in orbit so that American troops on the ground are not left without communications and intelligence. But the Pentagon also wants cool new toys that –hypothetically– would kill ballistic missiles during boost phase.

Also on rt.com
Weaponizing space & dreams of new tech: US missile defense review in a nutshell


The 2020 budget proposal asks for $304 million for space-based anti-missile weaponry, including powerful lasers and neutral particle beams, Defense One reported. Most of the money is to be poured into the latter project, which is supposed to result in an experiment sometime before 2023.

The neutral particle beam, also dubbed orbital ion cannon, is a device, which charges atoms, accelerates them in a magnetic field to near-light speed, then neutralizes the particles and shoots them at a target. Once it reaches its target, it generates intensive heat – and unlike a laser beam, it cannot be neutralized by a mirror. Basically, it would resemble the death rays of the early science fiction days.

But there is a catch: the equipment required to generate it is far too massive to be easily deployed in space. At least that was the case the last time the Pentagon played with the idea. In 1989, US military researchers launched a sounding rocket with a beam device on board as part of the Beam Experiments Aboard Rocket (BEAR) project.

Defense officials, who held a conference on the subject last week, seem cautiously optimistic about the advances that the technology has made in the three decades. “Power generation, beam formation, the accelerometer that’s required to get there and what it takes to neutralize that beam, that capability has been matured and there are technologies that we can use today to miniaturize,” one senior official said.

The highly public nature of the experiment, however, indicates that it may have more in common with Ronald Reagan than the time of its previous iteration. The Republican president famously tricked the Soviet Union into unnecessarily boosting its defense spending by pushing the Strategic Defense Initiative, also dubbed Star Wars by the media – an (overhyped) system of space-based anti-ballistic missile defenses that supposedly could render Moscow’s nuclear deterrence obsolete.

Also on rt.com
US plans for space wars are real – Russian Foreign Ministry


Khodarenok questioned the relatively tiny budget requested for the supposedly-breakthrough weapon, saying it would not be enough even to buy “three fifth-generation F-35 jets.” He believes the experiment might be more of a signal to scientists that such a technology is desired and the work needs to be continued – just in case a bright idea appears on how to implement it in practice.

A particle beam may indeed look promising as a counter to ballistic missiles, and especially to hypersonic cruise missiles – the type of weapons that the US currently has no means to counter, Khodarenok added. But, he adds, the US claim that the technology to make a feasible prototype is there, especially in terms of small-sized, high-capacity power sources, may be blown out of proportion.