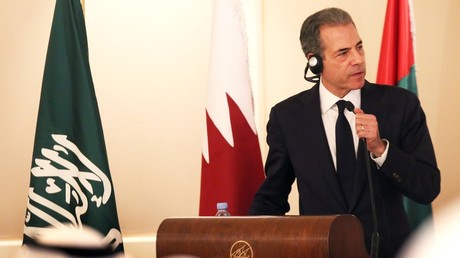 Richard Stengel, once the fourth-ranking official in the US State Department and a former editor at Time, has seemingly backed the use of government propaganda against citizens during a discussion about ‘fake news.’

The former US under secretary of state in the Obama administration, who was also the managing editor of Time magazine from 2006 to 2013, has made a career of writing about disinformation use. In his time in government, Stengel used a State Department blog to describe Russia Today as operating a “disinformation campaign.”

In a university workshop organized by the Council On Foreign Relations, a US think tank for journalists, educators and business executives, Stengel now appears to approve of propaganda, which is the dissemination of biased or misleading information with the goal of influencing a certain agenda.

“Basically every country creates their own narrative story,” Stengel said. “My old job at the State Department was what people used to joke [call] the chief propagandist job. I’m not against propaganda, every country does it and they have to do it to their own population and I don’t necessarily think it’s that awful.”

At a Council on Foreign Relations forum about “fake news,” former Editor at Time Magazine Richard Stengel directly states that he supports the use of propaganda on American citizens – then shuts the session down when challenged about how propaganda is used against the third world pic.twitter.com/ClAT5POv7G

The comment didn’t go down well with one audience member, however, who said that the US media “flipped” on the developing world. “We lived with, for many, many years, a master narrative that was and still is propaganda,” the man said.

The elites propaganda is not the normal propaganda, they have researched how to practically assault the readers mind and crush your spatial intelligence, this is fully intentional that’s not propaganda that’s weaponized info…

Propaganda means fraud. They should have not talked about “propaganda” but about “deceiving masses”.
Than he would have not leaved at the end but at the begin.

What else would you expect from the Council on Foreign Relations? 🤔

During the talk, Stengel lead a panel exploring the changing face of news media. Joan Donovan, media manipulation researcher at Data & Society, described how a desire by news outlets to hoover up information online is leading some journalists to pick up false stories.

Giving an example of fake weather pictures being presented as real in the news, she suggested that journalists are no longer in control of the information they acquire.

“They [reporters] are not even in control of the distribution of those images [appearing online] anymore. They don’t have time to vet them, they’re showing up on Twitter. The issue with making sense of that source material is that, in a sea of information, there are authentic pieces and there are things that people have made in order to leverage the moment.”

She also said journalists are increasingly falling into traps set by people or organizations designed to undermine entire news networks.

“It’s a tactic that these, what I call media movements, have taken up,” she said. “There are movements of people online that only care about destabilizing the media industry. They’ll even sometimes impersonate white nationalists to try get media to pick up a story. What they really want to do is get journalists to issue retractions and correction to destabilize the entire news network.”