In a column for the Telegraph, Farage said he would welcome Le Pen as the new president, despite his long-standing concerns about the Front National (FN), of which she was leader before deciding to run as an independent.

Farage said he would welcome the independent candidate, who is competing against Emmanuel Macron, leader of the centrist political party En March!

The Brexiteer, who currently hosts a radio show on LBC, said he would welcome her especially in light of her clear willingness to seal a trade deal with a post-Brexit UK.

“From a UK perspective, as we enter tough negotiations, what is best for our country?” Farage asked.

He said Macron, on the other hand, is a mere “cardboard cut-out creation of the political class.”

“I have no doubt that a Le Pen victory would give the EU an even bigger headache than the UK voting for Brexit, which is why the European Commission is openly backing Macron.

“Her victory would take much of the pressure off our negotiations. She will put France first and take her country out of the euro, which has damaged their competitiveness.”

Farage, who is also a Fox News commentator, claimed even if Le Pen does not win the presidency this time around, she will be elected in 2022.

He said it is “monstrous” that Le Pen has always been automatically associated with her father, who is a convicted anti-Semite.

“I wonder whether, had her surname not been ‘Le Pen’, she might now be ahead in the polls.

“There is nothing she has said in this entire election campaign that I find unreasonable or extreme. 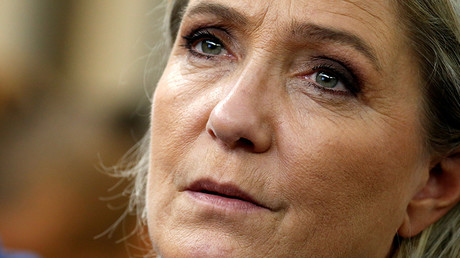 “Indeed, she has a more rational line on Islam than many Euroskeptic parties across the Continent.

“She is a sincere Euroskeptic, and under her the FN is about sovereignty, not race. Marine has met virtually all of my previous conditions.”

“The results in Great Britain are formidable. Their growth is double our growth.”

She encouraged relations between France and the UK, before slamming the EU for its “blackmailing” tactics.

“There is no reason not to take the British decision in our stride and work with Great Britain in negotiations that will take place between two nations that have had long-standing trade relations for centuries.”

“What I cannot stand in the behavior of the EU with regards to Great Britain is blackmail, constant threat. This structure is no longer moving without blackmail and threat.”