Moore’s new documentary, scheduled to hit theaters on September 21, seeks to “bring Trump down” before the November midterms. The title is a retread of his 2004 work ‘Fahrenheit 9/11,’ with the reversed date referring to Election Day 2016.

Trump is an “evil genius” who has “no intention of leaving the White House,” Moore told HuffPost in an email interview on Thursday, after the trailer for his new film was released. The clip refers to Trump as “the last president of the United States.”

Help is on the way from “the most unlikely of places,” Moore said. “The resistance ― the true resistance ― is not coming from the Democratic Party or from the liberal establishment. I can’t reveal too much right now, but there is a real insurgency taking place. I don’t know if it will succeed or not. It might be too late.” 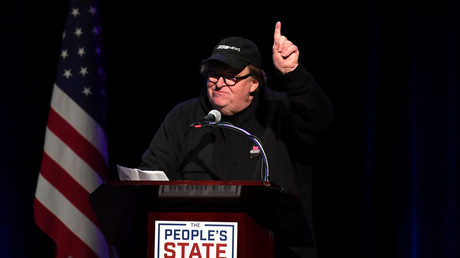 He followed that up with rejecting the idea his film is about giving liberals hope in the age of Trump.

“F*ck hope,” Moore said. “Hope is passive. Hope gives you permission to let someone else do the work. Hope leads people to believe that tax returns, or a pee tape, or the FBI or an adult film star will save the country. Hope, and the passivity that comes with it, is what helped get us here to begin with. It’s the lazy way out. We don’t need hope. We need action.”

In the interview, Moore argued that the majority of Americans agree with him on the issues, from universal health care and LGBQT rights to gun control, free college and taxing the rich. The reason Trump is president, however, is that the Democrats’ choir is singing different songs.

“My choir is the American people. The old guard of the Democratic Party has failed to speak to them. I will at least give them a song they can belt out,” he said. “Once we come together in beautiful harmony, the Trump crime family will be prosecuted, law and order will be restored, we’ll have Medicare for All…”

Known for activist documentaries about auto workers (Roger & Me), gun control (Bowling for Columbine) and healthcare (Sicko), Moore has been an outspoken critic of Trump during the 2016 campaign and ever since.