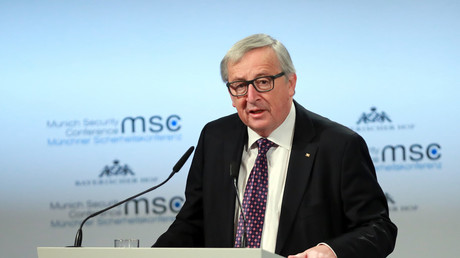 President of the EU Commission Jean-Claude Juncker took a dig at UK PM Theresa May as he told reporters it would be “good for Britain” if he was its prime minister. The reaction suggests agreement on that is far from universal.

Juncker said at a European Council summit on Friday: “I am not a British prime minister, it would be good for Britain if I was.” He was replying to reporters who asked him what he thought the outcome of Theresa May’s Brexit discussions with her divided cabinet would be. The response on Twitter was predictable.

This is the man who didn’t even visit Britain to canvass for his candidacy of EU Commission president. #Brexitpic.twitter.com/Surqpr2K1P

His definition of “good” being suicide of course.

I couldn’t think of anything worst.

Err um: Juncker: “I am not a British prime minister, it would be good for Britain if I was” Thanks @rosskempsell

Yes, ‘Heil Juncker’ and all that…

It follows reports of Juncker smirking during an EU Commission press conference on Thursday when he claimed that he would “never interfere” in UK party politics. He said he “fully trusts” that May is capable of bridging differences within her Conservative Party.

He made the comments on the back of 62 Tory ministers sending May a “ransom” letter, in which they demanded that she seek a hard Brexit approach, and outlined exactly how she could achieve that. Juncker said: “I have full trust in the British prime minister, and I will never interfere in a party controversial matters.”