Hundreds of millions of dollars in tax credits are going to Mylan, an allergy treatment producer that sparked controversy for hiking the price of its EpiPen. The completely legal financial scheme is based on “clean coal” credits approved by Congress.

Reuters has reviewed Mylan NV’s company filings and reported Wednesday that the pharmaceutical company has been boosting its bottom line since 2011 on refined coal investments. The investments themselves have been losers, but in 2004, as part of an effort to promote “clean coal,” Congress passed tax credits for those willing to invest enough capital in them anyway.

The pre-tax losses on the coal investments were $92.3 million in 2016, $93.2 million in 2015 and $78.9 million in 2014, all of which were deductible, according to tax experts, and this scheme helped make up about 9 percent of the company’s earnings last year, Reuters reported. 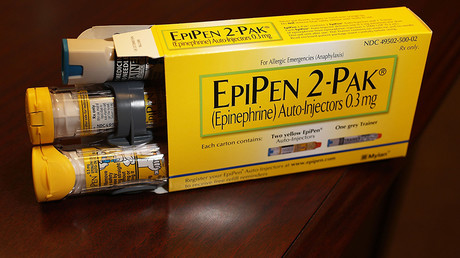 The tax credit program expires in 2021.

Reuters also cited an unnamed person “familiar with the matter,” who said that Mylan produced approximately 16 million tons of refined coal last year, as the government issued $6.81 in tax credits per ton. The source also said that the company’s expenses amounted to about 60 percent of gross credits earned.

The company’s annual board meeting on Thursday may see a clash between investors and board members, as Reuters reports that investors are upset with Mylan Chairman Robert Coury’s nearly $100 million pay package last year.

Leading the move to vote against the board is New York City Comptroller Scott Stringer, who oversees New York City pensions funded by 1.1 million shares of Mylan stock, and who told Reuters: “From the EpiPen pricing debacle to embracing complex tax avoidance strategies, Mylan’s board appears more focused on financial engineering than on the company’s core business.”

Mylan has avoided high US tax rates since 2015 by relocating its headquarters overseas, paying “just over four percent in 2014 and 7.4 percent in 2015,” according to Reuters.