Damning new evidence reveals that an engineer working on the pedestrian bridge in Greater Miami, Florida, that collapsed on Thursday had attempted to report damage days before the incident took place. 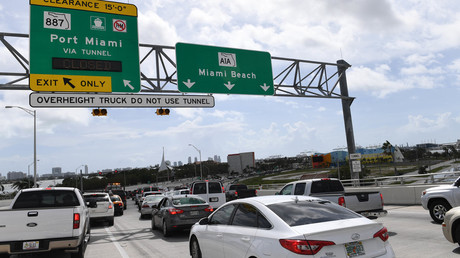 No one was available to hear the March 13 message until Friday, one day after the bridge collapsed, killing at least six people and leaving a massive pile of rubble on an eight-lane highway. Nine others were taken to local hospitals, authorities reported.

The Florida Department of Transportation (FDOT) released a statement with a short transcript of Pate’s voicemail and explanation of events leading up to the catastrophe.

“Um, so, uh, we’ve taken a look at it and, uh, obviously some repairs or whatever will have to be done but from a safety perspective we don’t see that there’s any issue there so we’re not concerned about it from that perspective although obviously the cracking is not good and something’s going to have to be, ya know, done to repair that,” Pate said in the voicemail.

“We are heartbroken by the loss of life and injuries, and are carefully examining the steps that our team has taken in the interest of our overarching concern for public safety. The evaluation was based on the best available information at that time and indicated that there were no safety issues.”

The bridge, which was due for completion in 2019, was engineered to allow students to cross the busy road without holding up traffic. The impetus for the project came after a vehicle hit and killed an FIU student last year.

One witness posted dashcam footage of the disaster on Instagram.

US Senator Marco Rubio (R-FL) tweeted about the incident: “At the time of the collapse construction crews were working on the diagonal beam at the north end of bridge applying [post-tensioning] force to strengthen it.”

FIGG also released a statement in light of the tragedy, claiming that “no other bridge designed by Figg Bridge Engineers has ever experienced such a collapse.” Yet, the same company was responsible for a collapse of a 90-ton segment of another bridge in Virginia in 2012, which left four workers with minor injuries.

“Our deepest sympathies are with all those affected by this accident. We will fully cooperate with every appropriate authority in reviewing what happened and why. In our 40-year history, nothing like this has ever happened before. Our entire team mourns the loss of life and injuries associated with this devastating tragedy, and our prayers go out to all involved.”

Miami-Dade Police Director Juan Perez stated that the process of retrieving bodies and removing the debris was “very slow.”

FIU President Mark B. Rosenberg reassured others that the school would conduct its own investigation. He said that FIU contractors were certified by the state and followed all essential protocols while building the bridge.

“Obviously, everybody is in shock here,” said Rosenberg, who had been a public champion of the project. “We just want answers, and we’re going to get answers.”