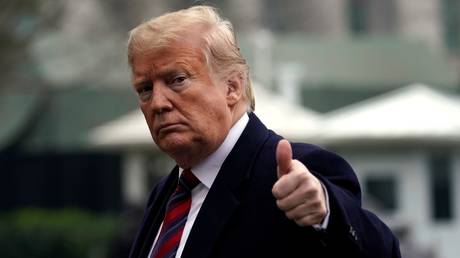 US President Donald Trump has sparked confusion after retweeting a theory that the Russiagate scandal was partly designed to help the UK “counter Russian influence” by “baiting” the US into taking a tougher stance on Moscow.

The claim was made by William Craddick, founder of Disobedient Media, who was commenting on an earlier tweet by Democratic presidential candidate Tulsi Gabbard.

Russiagate was designed in part to help the UK counter Russian influence by baiting the United States into taking a hard line against them. Leaves us all with a more dangerous world as a consequence. Just another episode of the Great Game. https://t.co/qYpuzvmSy8

Gabbard’s tweet said that people pushing the narrative of collusion between Trump and Russia were causing Trump to do “everything he can to prove he’s not [Russian President Vladimir] Putin’s puppet — even if it brings us closer to nuclear war.”

Short-sighted politicians & media pundits who’ve spent last 2 years accusing Trump as a Putin puppet have brought us the expensive new Cold War & arms race. How? Because Trump now does everything he can to prove he’s not Putin’s puppet—even if it brings us closer to nuclear war.

Craddick appeared to agree with the sentiment, saying that the situation “leaves us all with a more dangerous world as a consequence” – which poses the question of whether Trump’s sharing of Craddick’s comment was a mindless retweet or an actual endorsement.

Either way, news of the retweet quickly spread across the pond, where the UK’s Independent newspaper reported immediately on Trump’s “endorsement” of the “explosive claim” that Britain had a hand in encouraging Russiagate.


The Independent also took the time to needlessly smear Gabbard in the piece, claiming that she “appears to be receiving support from Russia” – citing only a flawed NBC report as evidence.

The NBC “analysis” in question relied on ‘expertise’ from discredited cybersecurity firm New Knowledge, which was exposed by the New York Times last year for having created fake Russian bots online, ironically with the very goal of smearing candidates for supposed ties to Russia.