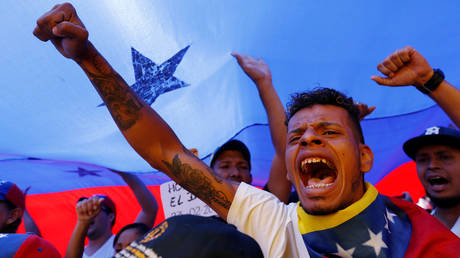 Failure of the attempted forcing of US “humanitarian aid” into Venezuela has not deterred the Trump administration hawks from seeking regime change in Caracas. They now threaten new sanctions unless Venezuela “embraces democracy.”

Convoys of USAID supplies intended for supporters of US-backed “interim president” Juan Guaido were supposed to cross into Venezuela from Brazil and Colombia on Saturday, but were turned back amid sporadic clashes between the opposition and supporters of President Nicolas Maduro.

Undeterred, US officials have doubled down on regime change rhetoric. Secretary of State Mike Pompeo denounced the violence as being “perpetrated by Maduro’s thugs” and said the US backs the families of those who suffered in their “demand for justice.”

The US will take action against those who oppose the peaceful restoration of democracy in Venezuela.


Pompeo also called Maduro a “sick tyrant” for stopping trucks filled with aid, posted images of burning vehicles on the border bridge and appeared to endorse claims by Guaido supporters that the trucks were set on fire by Venezuelan security forces. There was no evidence to back that claim, however. The trucks had never crossed into Venezuela, and caught fire on the Colombia side of the bridge, where they had been surrounded by opposition activists.

We denounce Maduro’s refusal to let humanitarian assistance reach #Venezuela. What kind of a sick tyrant stops food from getting to hungry people? The images of burning trucks filled with aid are sickening. pic.twitter.com/bJ1Qsxkgx8

Pompeo was echoing the words of US national security adviser John Bolton, who praised Guaido for “personally leading the effort to bring aid to Venezuelan people” in the same tweet in which he urged the Venezuelan military to defect to the US-backed pretender and “choose the road of democracy” over Maduro and a “band of thieves.”

Masked thugs, civilians killed by live rounds, and the burning of trucks carrying badly-needed food and medicine. This has been Maduro’s response to peaceful efforts to help Venezuelans. Countries that still recognize Maduro should take note of what they are endorsing. pic.twitter.com/KlSebd2M5a

According to RT correspondent Dan Cohen, who was on the ground in Cucuta, Colombia, Guaido was nowhere to be seen on Saturday, despite making a flashy appearance at a charity concert the day before and promising he would lead the charge back into Venezuela.

Just over two dozen Venezuelan military and security personnel actually defected to the rebels on Saturday, according to another Guaido cheerleader, Senator Marco Rubio (R-Florida). Apparently frustrated by the pace of defections, Bolton has issued another threat to the Venezuelan military:

Venezuela’s military has a choice: Embrace democracy, protect civilians, and allow in humanitarian aid; or face even more sanctions and isolation.

Most high-ranking Venezuelan officials are already blacklisted by the US, and the country itself is under an economic, political and diplomatic blockade almost on the level of US sanctions against Iran and North Korea, so it is unclear what more Bolton could threaten them with.


On Thursday, Rubio insinuated that the US would be targeting the family of Ivan Hernandez, commander of Maduro’s presidential guard: “You should think very carefully about the actions you take over the next few days in Venezuela. Because…”

… your actions will determine how you spend the rest of your life. Do you really want to be more loyal to Maduro than to your own family?

On Saturday, Bolton was offering a carrot to balance out the proverbial stick, saying that Guaido has given amnesty to Venezuelan military members who defect, and that they can now “stand proud to work on behalf of a democratic Venezuela”


Even though he campaigned on a platform opposing nation-building, regime change and US interventions, President Donald Trump seems fully on board with the Caracas gambit. He has tried to leverage the Venezuela policy against Democrats at home, arguing that he is opposed to “socialism” anywhere. Pompeo and Bolton have already made threatening comments about Cuba and Nicaragua as well.

On Saturday, though, Trump merely linked a video from his speech about Venezuela in Miami earlier this week, preceded by a one-liner, “God Bless the people of Venezuela!”