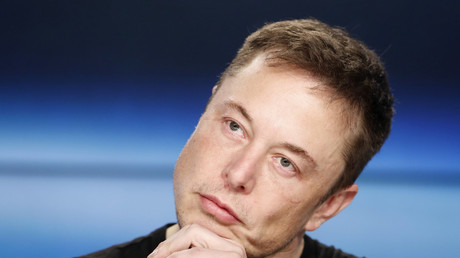 Tech entrepreneur Elon Musk appears to have declared war on the media, tweeting that he was launching a site that would let the public rate the credibility of journalists, editors and publications – which he will call “Pravda.”

Annoyed by the recent media coverage of him and his companies, Musk fired off a series of tweets on Wednesday, culminating with the proposal for the new site. The public would be able to rate the “core truth of any article” and track the “credibility score over time” for each reporter, editor and publication, he said.

Going to create a site where the public can rate the core truth of any article & track the credibility score over time of each journalist, editor & publication. Thinking of calling it Pravda …

Pravda, the word for “truth” in most Slavic languages, was also the name of the official newspaper of the Russian (later Soviet) Communist Party for much of the 20th century.

In a follow-up tweet, Musk explained the reasoning behind creating such a site. Even if the public doesn’t care, he said, “the journalists, editors & publications will. It is how they define themselves.”

To the warnings that bots and trolls could game the system, and that the public doesn’t care about the truth, the Tesla and SpaceX mogul replied, “I have faith in the people.”

He also had a testy exchange with a reporter from the Verge, who accused him of acting like US President Donald Trump.

“Anytime anyone criticizes the media, the media shrieks ‘You’re just like Trump!’” Musk replied. “Why do you think he got elected in the first place? Because no ones believes you any more.”

Thought you’d say that. Anytime anyone criticizes the media, the media shrieks “You’re just like Trump!” Why do you think he got elected in the first place? Because no ones believes you any more. You lost your credibility a long time ago.

The tech mogul is hardly the first to propose fact-checking and rating journalists for credibility. A cottage industry of “fact-checkers” has mushroomed following the 2016 US presidential election. Social network giant Facebook recently announced it would rank news sites based on “community trust” and partnered up with a controversial think-tank to “protect elections” from misinformation.

Last year, an attempt by Hillary Clinton supporters to create a fact-checking media platform was met with ridicule. That project, called Verrit, has only consisted of a logo on the homepage since February.

A poll that Musk posted on Twitter suggests a lot of the users on the platform agree with him. So far, 87 percent of nearly 200,000 voters favor the new project, with only 13 percent choosing “No, media are awesome” as their preferred option.

Musk’s mounting frustration with the media comes amid recent bad press Tesla’s Model 3 sedan has received over braking problems. Bloomberg reported in April that Tesla was losing $6,500 a minute and it could fail before the end of the year. There has even been a proposal to oust him as chairman of Tesla’s board.

Critics have long accused the South African-born billionaire of scoring generous government subsidies for projects such as electric cars, solar roofs or high-speed mass transit. While Tesla, SolarCity and Hyperloop haven’t quite lived up to hype, Musk’s SpaceX has been very successful at launching payloads into orbit and reusing the launchers.

It appears Musk already incorporated Pravda Corp. in California last October, according to documents dug up by one reporter.

Musk has a history of picking symbolic or funny names for his endeavors. Tesla is named after a Serbian-American inventor of alternate current (AC), while the enterprise drilling tunnels for Hyperloop is called The Boring Company.