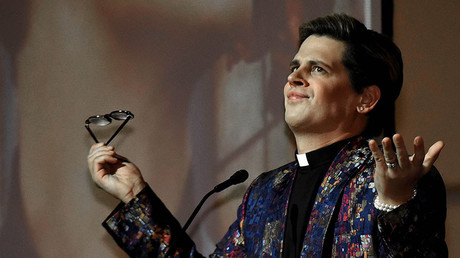 “I will not accept a manuscript that labels an entire class of people ‘mentally ill,’” one comment reads.

Yiannopoulos’ book deal with publishing giant Simon and Schuster was cancelled in February after it was revealed that he advocated pedophilia. He had reportedly secured an advance of $255,000. In July, Yiannopoulos sued Simon and Schuster, with the publisher submitting documents showing their objections to the manuscript.  The text is available for download on the New York State court’s website.

The editor is a conservative man who has published books for 45 & other folks with similar opinions. You can see that in the occasional “good point” comments. But mostly he was very politely having NONE of Milo’s bullshit.

Editor Michael Ives’ criticisms of the book suggest poor writing amid racial epithets. “Throughout the book, your best points seem to be lost in a sea of self-aggrandizement and scattershot thinking.”

Other notes read, “Delete irrelevant and superfluous ethnic joke” and “This is not the time or place for another black-dick joke.”

I didn’t read the manuscript. Just the comments. They’re…amazing. Even better than the excerpts in the filing.

And a pretty good summary of the book I imagine. pic.twitter.com/2kPESxAlA9

Yiannopoulos was permanently banned from Twitter after he was accused of orchestrating the harassment of African-American actor Leslie Jones. During an appearance on HBO’s ‘Real Time’ with Bill Maher alongside comedian Larry Wilmore and commentator Malcolm Nance, both African-American, Yiannopoulos told Maher he needed to get “higher IQ guests.”

Ives’ notes also indicate Yiannopoulos’s tendency to not use citations to back up his assertions. “Citations need” and “no basis to say this.”

In October, the former Breitbart News editor was filmed singing America the Beautiful along with Richard Spencer, the white nationalist figure who engaged in a ‘Heil Hitler’ salute.

Weeks later, Yiannopoulos called thousands of Syrian refugees “rapists,” before backtracking on his comments when he discovered they were actually Christian. He made the comments on an Australian radio station.

In February, protests turned to riots at the University of California in Berkeley after Yiannopoulos was scheduled to speak. Police said they could not guarantee the safety of attendees amid a crowd of demonstrators that included about 150 aggressive anti-fascist protesters intent on shutting down the forum.