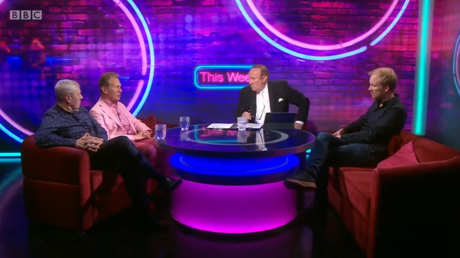 Dutch historian Rutger Bregman, whose shaming of elites at Davos for not paying their taxes made him a worldwide sensation, has now launched a stinging attack on the BBC, after appearing on This Week, the outlet’s political show.

In a series of devastating tweets, he claimed he’d been invited on to the program under false pretenses. He revealed that producers had originally invited him to talk about his book, but ended up pushing him to give his opinions on Brexit and the EU, despite his protests that those issues were outside his expertise.

Michael Portillo on Rutger Bregman @rcbregman film: “I thought it was a pretty ill-informed”

But the Dutch historian presses on, saying how excited he was that dismissed ideas are suddenly being discussed#bbctwpic.twitter.com/W4hT9z8xOw

Davos was a bewildering experience, but this beat everything.

1. Last night, I was invited to be on the BBC show ‘This Week’. I thought that Davos was a bewildering experience, but this beat everything.

2. A bit more background on how incredibly stupid the show really is. First they invite you to talk about your book, and pretend to be really interested in your ideas.

3. Then they ask: ‘Can you make a statement about the European Union?’

Bregman lashed out at the show’s presenter Andrew Neil, guests Michael Portillo and Alan Johnson, both of whom are former UK government ministers, saying the “right-wing dinosaurs” had ganged up on him, cutting him off, making up facts and changing the subject “every ten seconds.”

8. This was the worst experience I’ve had with UK media, but after quite a few interviews in different countries, I think I can say that, on average, British journalists are the least curious of all. So often, being ‘critical’ is just a pose.

Summing up, he claimed it had been his “worst experience” with the UK media and suggested that British journalists are the “least curious” about ideas on how to tackle poverty, such as a Universal Basic Income, outlined in his book ‘Utopia for Realists.’


Neil has hit back at Bregman’s tirade on social media, claiming the Dutchman is merely embarrassed about his performance and that, for a man who is all about “’taxes, taxes, taxes,’ his knowledge of taxes seems thin.”

US media fawned over R Bregman. He should’ve known @bbcthisweek doesn’t do fawning. We asked some pertinent questions. He didn’t know answers. Embarrassed, he’s now lashing out. Ho hum. But for man who’s made his name with “taxes, taxes, taxes”, his knowledge of taxes seems thin. https://t.co/QljrL57lXP

Commenters under both Bregman’s thread and Neil’s rebuke mostly sided with the Dutch economist, though – lamenting the BBC’s bygone credibility.

Erm. That’s not what I watched. I saw 3 old men, enjoying the sound of their own voices….whilst ignoring the answers they requested.

Politics at the BBC is now part of the Light Entertainment Department.

This is the norm for BBC political programming. Most panels made up of neo-liberals. Even the so called left panelists are Blairite dinosaurs like Alan Johnson. Found their treatment of you last night bullying and would not allow you space to make yr points.

I saw the interview. I can’t describe any of you three close to what I consider mainstream or relevant.

Mentioning Venezuela? Makes you laughable. You suffer from a case of the “whatabouts”.

This sums it up: pic.twitter.com/OoQjVqdWzT

Bregman, meanwhile, used his getting drowned out on the BBC program as another opportunity to amplify his own message – tacking links to a few of his smoother TV appearances at the end of the critical Twitter thread.