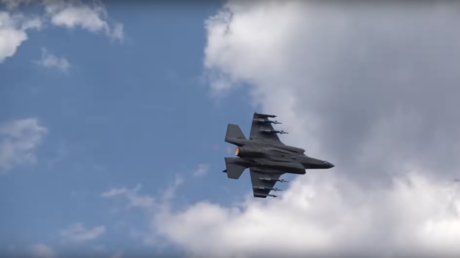 Rare footage of an F-35A Lightning II stealth fighter flying over the Sierra Nevada mountains in nearly full ‘Beast Mode’ with an external load of bombs and missiles, has been captured by a Dutch aviation photographer.

The video, captured as part of the assignment for the Dutch newspaper ‘de Telegraaf’, shows the supersonic, multi-role F-35 armed with missiles on the exterior of the aircraft – a rare set-up for the stealth jet.

“It was the very first time that the Dutch OT&E unit flew with a full external load out after they previously flew with just the AIM-9X and ‘just’ two GBUs,” Crebas told the Aviationist before, publishing the video of the spectacle on YouTube.

The spectacular footage shows the Lockheed Martin signature aircraft maneuvering over the so-called Starwars Canyon in California on July 26 just a stone’s throw away from the videographer. Four GBU-12 500-lb Laser-Guided Bombs and two AIM-9X Sidewinders can be seen attached to the external pylons.

The multi-purpose 5th Generation fighter was designed to be able to handle up to 22,000 pounds of combined internal and external ordnance. When converted to full ‘beast mode’ for mixed air-to-air and air-to-ground attack missions, the jet is supposed to be armed with six GBU-31 JDAM 2,000lb guided bombs, two AIM-120 missiles and two AIM-9X Sidewinders. This mode has yet to be tested.

Developed by the US with the help of eight allies, the F-35 project is the most expensive weapons system in history, with an estimated lifetime cost of $1.4 trillion. The stealth fighter continues to be plagued by various faults, including malfunctions in the oxygen-supply system. In 2017, a Pentagon report revealed the jet had more than 270 deficiencies, ranging from software to structural problems.