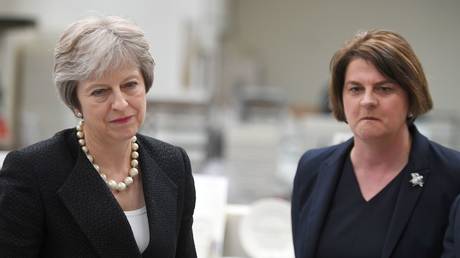 The DUP leader Arlene Foster said that her party “regrets” that it is unable to support PM Theresa May’s current Brexit deal. It comes as May appears to have swayed some Tory rebels with her promise to quit post-Brexit.

The Democratic Unionist Party won’t back the deal as long as it “poses a threat to the integrity of the UK,” Foster told Sky News, repeating her party’s earlier sentiment.

The DUP’s support for May had been contingent on the PM offering a deal minus the so-called ‘Irish backstop,’ a measure that would see Northern Ireland remain in a customs union with the EU, avoiding the re-emergence of a hard border on the island of Ireland, but making the Irish Sea a de-facto customs barrier between Northern Ireland and the rest of the EU.


Foster’s statement comes as MPs are voting on eight alternative Brexit proposals, including a Labour Party plan for a “softer Brexit” that would supposedly honor the results of the 2016 referendum while leaving room to negotiate with the EU.

In an effort to win support for her own Brexit agreement, May offered on Wednesday to resign in exchange for support for the deal from her Conservative Party colleagues. While a group of hardline Brexiteer MPs from Jacob Rees-Mogg’s European Research Group caucus had previously held steady on their refusal to back May’s plan, the BBC reported that 25 Tories “now changed their minds,” possibly enticed by May’s vow to step down.

Without the support of the DUP, however, an ERG spokesman earlier said that there is “no way” his group can provide enough votes to pass May’s deal.