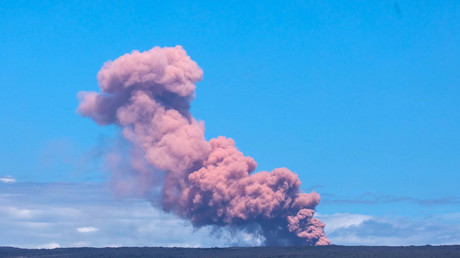 Plumes of ash fell into the surrounding forestland as massive flows of lava reached the Puna community in the US state’s southernmost island, forcing the County Civil Defense to issue evacuation orders to some 10,000 residents.

Witnesses reported seeing “fountains” of lava rising 45 meters (150ft) into the air in Leilani Estates, while scientists warned those located downstream of the eruption were at risk of being covered in molten lava.

“There is fountains of lava, tons of lava coming out. Sounds like a jet engine,” Pohoa resident Ikaika Marzo said during a Facebook live broadcast, urging everyone in the area to help their community evacuate safely.

Hawaii’s most active volcano was disturbed by hundreds of small earthquakes, including a tremor measuring 4.6 on the Richter scale Thursday morning, according to the US Geological Survey (USGS).

Hawaii County has issued an emergency proclamation, giving extended management powers to the authorities to oversee disaster relief and ensure public safety. Officials say there is no way of knowing how long the eruption will continue.