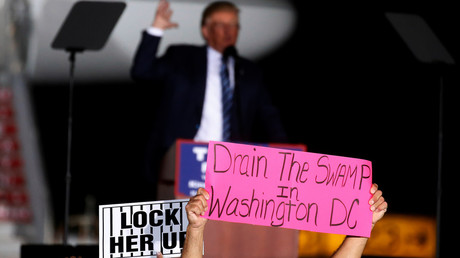 More than two thirds of Americans believe that US President Donald Trump has failed to deliver on his cornerstone campaign promise to “drain the swamp” in Washington, DC, a new poll has found.

The freshly released poll from Monmouth University found that 37 percent of Americans think that Trump has not really changed anything about the DC culture and a further 31 percent believe he has actually made things worse. However, one quarter of the poll’s respondents said Trump has made progress draining the swamp.

This is the fourth time Monmouth has asked the question in a poll since Trump took office. The results show a marginal positive outlook compared to when the question was last asked, in December 2017.

“Even though the president has certainly shaken up Washington, one of the reasons his job rating remains underwater is that he really hasn’t moved the needle on actually changing the political culture there,” Patrick Murray, director of the independent Monmouth University Polling Institute, said.

“Despite resurrecting his call to ‘drain the swamp’ in a tweet he sent yesterday, few Americans feel the capital has become any less swampy under Trump.”

The survey had a range of other findings, including that:

It also found that the overwhelming majority of people (79 percent) say they have not been surprised by how Trump has behaved as president. The survey was conducted from April 26 to 30, among 803 US adults. A slim majority of the respondents were self-reported independents (41 percent), while 33 percent were Democrats and 26 percent were Republicans. The margin of error is 3.5 percentage points.