Hundreds of drag kings and queens are expected to protest US President Donald Trump’s much-contested visit to London in mid-July.

Manchester drag performer Cheddar Gorgeous and fellow members of the LGBTQ community created the protest as a Facebook event. Almost a thousand people have clicked their attendance.

“Despite claiming on the campaign trail to be ‘gay friendly,’ the Trump administration has unleashed a barrage of policies and amendments that demonstrate the contrary,” Gorgeous claimed in a piece they penned in the Guardian. 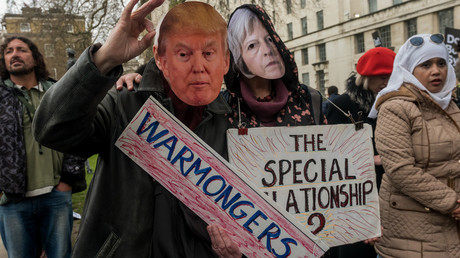 The Republican leader has implemented several policies which row back on LGBTQ rights. They include banning trans people from military service and rescinding legal protections for trans workers.

One of the organizers, Violet Blonde, said the protest seeks to denounce the president over his attempt to “erase” the LGBT community.

“With his largely anti-LGBTQ administration he has removed protection for trans students and workers, he has fired all of the members of the Presidential Advisory Council on HIV and AIDS (Which is more than an LGBTQ+ issue), tried to re-ban trans people from the military – you just have to google it and you can see that this president is trying to erase and damage our community and our rights which we have fought so fiercely for,” Blonde said in a statement to RT.

She went on: “We will not be erased. We are protesting because we need to be visible.

He needs to see that we will not go away. We all need to stand together, as one.”

Trump was initially supposed to visit the UK in January to open the new US Embassy in Vauxhall, London. But it is understood the visit was cancelled amid White House officials’ concern over the fierce opposition the president would be met with.

The prospect of Trump landing in the UK has been met with widespread outcry ever since PM Theresa May invited him over soon after he was sworn in as the 45th President of the US in January 2017. Plans had in fact been made for the controversial leader to come to the UK last summer, but Trump reportedly called it off, as he told May he feared the backlash.

A petition calling for the invitation to be rescinded amid claims the visit would be an “embarrassment to Her Majesty the Queen” garnered up to 1.8 million signatures.

Labour leader Jeremy Corbyn, Labour MP David Lammy, and London Mayor Sadiq Khan were among the influential political figures to voice their opposition to a red carpet being rolled out for the US leader.