The Dow Jones Industrial Average (DJIA) closed above 24,000 for the first time, as two prominent stocks lead the way on the 30-stock index. The surge occurred as new numbers show the US economy growing, while congress gets closer to passing tax reform.

The surge on Thursday occurred when the blue-chip index, which tracks the shares of the top-performing publicly traded companies, gained 331.67 points, and closed at the end of the trading day at 24,272.35. The massive gains were propped up by two stocks from United Technologies and Boeing, which both climbed 2.8 percent, according to the New York Post.

The DJIA wasn’t the only stock market index that soared on Thursday, Standard and Poor’s 500 index (S&P 500), which is an index based on market capitalizations of 500 large companies that all have common stock listed on the NASDAQ or the New York Stock Exchange, advanced .08 percent. And another index called the Nasdaq Composite also made significant gains, as it climbed 0.7 percent, CNBC reported. 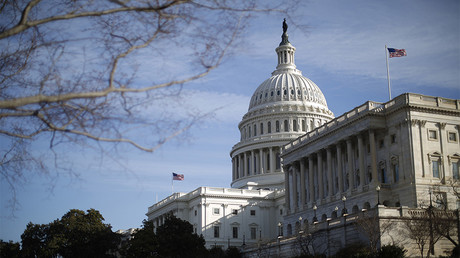 As the trading day opened on Thursday, the Dow speedily gained more than 100 points, and allegedly got an extra push upwards after Senator John McCain (R-Arizona) said he supported the tax overhaul bill currently making its rounds in the Senate, the Post reported.

The surge also happened on the heels of new numbers released from the government on Wednesday, showing the US economy grew at annual pace of 3.3 percent in the third quarter, from the month of July, through September, which is the fastest growth in three years, the Pittsburgh Post-Gazette reported.

The government stated that  third-quarter growth surpassed their initial reports of a three percent expansion.

Investment in business specifically increased at an annual pace of 7.3 percent from July through September, which is cited as the biggest gain since the end of 2016. However, consumer spending, which accounts for 70 percent of economic output in the US, only grew at an annual pace of 2.3 percent. This figure is down from 3.3 percent in the second quarter.

With the good economic news coming from the US, the global economy is also gaining momentum, as most major countries are now growing at the same time for the first time in years, according to CNN Money.

Since President Donald Trump was elected to the presidency last year, the Dow has risen nearly 6,000 points, notching a total of 79 daily record highs since, CNN Money reported.