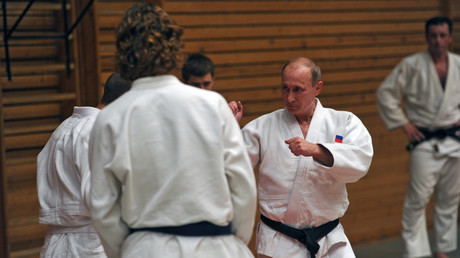 US politicians have joined their European counterparts in voicing warnings to Donald Trump ahead of his meeting with the Russian leader in Helsinki. The Democrats urged him not to meet alone with “trained KGB vet” Vladimir Putin.

“If you insist on meeting Russian President Vladimir Putin in Helsinki, Finland, on Monday, we write to urge that you include senior members of your team and not meet one-on-one with Mr Putin, as reportedly planned,” a group of eight senators wrote.

READ MORE: Germany warns Trump against ‘unilateral deals’ with Russia ahead of talks with Putin

The politicians characterize the Russian leader as “a trained KGB veteran” who will come to the Helsinki meeting “well-prepared.” They didn’t miss the chance to remind Trump of a statement by the Kremlin, saying that the one-on-one meeting “absolutely suits” Putin. “There must be other Americans in the room,” the letter asserts.

The Democrats didn’t forget to include the good old mantra – ‘Russia meddled into the US elections.’ The letter stated that “Mr Putin is not a friend of the US,” and insisted that if Trump isn’t “prepared to make Russia’s attack on the US election the top issue,” then he should cancel the Helsinki summit.

Assuming Putin wants “to see the West divided and weakened,” the Democrats warned their Republican president “not to fall into his arms.”

President Trump must cancel his meeting with Putin if he doesn’t plan to make 2016 election interference the top issue of discussion. If he insists on meeting with Putin, doing so without other Americans in the room would be a terrible mistake & raises serious questions.

In conclusion, the senators suggest that Trump should send the Russian counterpart “a well-coordinated US message.” In order to be successful, the American president “must rely on the expertise and the experts of the State Department, Defense Department, CIA and other US government agencies – not wing it on your own,” the correspondence warns.

Relations between Moscow and Washington have been on a downward spiral ever since 2014, following the Ukraine crisis. After 2016, ties grew even worse, with the US accusing Russia of meddling in the US presidential election and slapping it with several rounds of sanctions. Since 2017, the two states have been exchanging a series of tit-for-tat measures that further strained bilateral relations, including the expulsion of diplomatic staff and closure of consulate missions.