A second visit to the UK by Donald Trump is already being planned, and it could come as early as next March. It follows Theresa May’s rejection of calls to cancel the US president’s visit in July over his clampdown on immigration.

Britain’s National Security Adviser Mark Sedwill and US Ambassador to the UK Woody Johnson were recorded making plans for Trump to come to the UK for a full state visit as soon as the UK crashes out of the EU.

“Let’s plan for a series of visits in his first term,” Sedwill is heard saying during the opening of the new US embassy in March in a recording released by Channel 4. 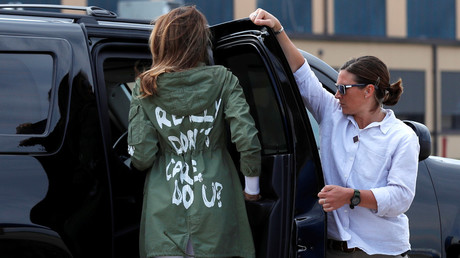 After suggesting next May for a state visit, he adds: “The key thing is that we get him here.”

Johnson replies: “Let’s get him here once. Once you get it then, you know what you are dealing with.”

Trump will be landing in London on July 14, despite widespread opposition to the his administration’s controversial policies.

Calls for the upcoming visit to be cancelled were recently renewed after it emerged that the president had given the green light for an immigration policy that separated children from their parents as they attempted to cross the US border illegally.

Prime Minister Theresa May rejected calls for President Donald Trump’s visit to be called off over what was branded an “inhumane” immigration policy.

The Tory leader did condemn Trump’s so-called “zero tolerance” policy in the Commons on Wednesday. She said it was wrong and that images and audio of children crying as they were separated from their guardians were “disturbing.”

Yet the PM ignored calls for the invitation to be revoked, citing the importance of the US-UK “special relationship” in the areas of security and defense. “When we disagree with the United States, we tell them so,” May told the Commons.

“But we also have some key shared interests with the United States, in the security and defense field and in other areas as well, and it is right that we are able to sit down and discuss those with the president of a country with which we have had a longstanding – and will continue to have a longstanding – special relationship.”