A bombshell document has been handed to Theresa May, tearing her argument for a customs partnerships to shreds. Tory Euroskeptics are now urging the PM to ditch her plan for the partnership, hours before crucial Brexit talks.

The 30-page paper hits hard at May’s cake-and-eat it approach to future UK trade deal, detailing how meaningful trade deals would be “impossible” to forge under her current plan and would render the UK’s International Trade Department “obsolete”.

The document states that “the new customs partnership proposed is undeliverable in operational terms and would require a degree of regulatory alignment that would make the execution of an independent trade policy a practical impossibility.”The 30-page letter was handed to the Prime Minister only hours before senior ministers are set to meet on Wednesday to discuss different options to replace customs union membership.

MP Daniel Kawczynski from the European Research Group (ERG), chaired by arch-Brexiteer Jacob Rees-Mogg, wrote to Theresa May to make his stance clear.

“I wish to put on record that I could not in good conscience vote for an agreement that would keep us in the customs union or partnership as set out in the proposal,” Kawczynski said, setting a grave tone for the crucial Downing Street meeting. ERG is a partly publicly funded research support group for the Tory party, which is seen as a bastion of Brexiteers.

The faction of Tory Remainers, led by right-wing darling Rees-Mogg, will undoubtedly result in a showdown around the Cabinet table. As the UK PM faces a potential Brexit mutiny, the stakes to get the customs partnership right could not be higher for Theresa May. On the morning of the looming customs confrontation, Rees-Mogg took to BBC’s Radio 4 program to explain the 30-page takedown. 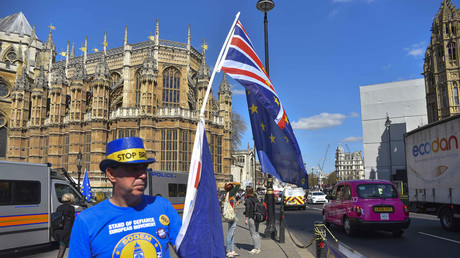 The North East Somerset MP assured listeners that Tory Euroskeptics are “not in the business of making threats” and will support the “Prime Minister and the progress of getting Brexit through.”

“Where we are in terms of customs will be decided between now and October is going to be part of the negotiation,” he said. “This customs partnership is one of those clever ideas that sounded plausible when first looked at, but when the detail was examined turns out to be deeply unsatisfactory, flawed, and does not get us out of the European Union – which people voted for.”

The resignation of pro-Remain MP Amber Rudd sent shock waves through the splinter group of Tory Europhiles, with her replacement Sajid Javid knocking the balance between Remain and Leave supporters within the Conservative Party off-kilter. The new Home Secretary has been viewed as a great boon for the Brexiteers – although Javid supported the Remain campaign, he has since been skeptical about remaining in the customs union and is increasingly being seen as an ally of the Brexiteers.

Cabinet ministers leading charge to exit the customs union are the same familiar faces from the 2016 EU referendum Leave campaign: Boris Johnson, Michael Gove, David Davis, and Liam Fox. On the eve of Wednesday’s crucial Cabinet meeting, Fox was adamant that the UK would leave the customs union. He refused to rule out resignation if the Prime Minister insisted on a compromise deal.