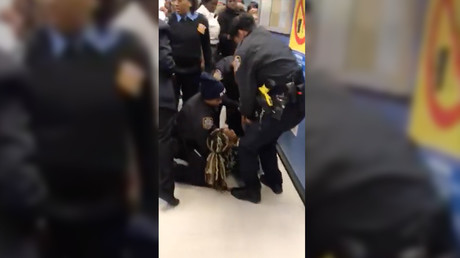 Disturbing eyewitness footage of a group of police officers wrestling an infant child away from his mother on the floor of a benefits office in New York as sparked outrage online and among city politicians.

The woman, identified by the police as Jazmine Headley, sat on the floor with her child for two hours as there were no available seats at the Brooklyn benefits office in Boerum Hill on Friday.

Following a verbal altercation with security staff, police were called to intervene. As the disturbing video opens, Headley is surrounded by a female sergeant and three accompanying officers who attempt to pull the child from her grasp.

“They’re hurting my son!” the desperate mother can be heard screaming repeatedly. One officer can be seen attempting to violently wrench the child from Headley’s arms, then proceeds to point a stun gun at the crowd of onlookers which includes other children.

Headley reportedly refused medical care for her and her son, and is being held without bail on Rikers Island, charged with resisting arrest, acting in a manner injurious to a child, obstructing governmental administration and criminal trespass. All officers involved remain on active duty at the time of writing, while the infant child is in the care of relatives.

The NYPD has introduced de-escalation training to prevent such egregious cases of excessive use of force which filled headlines in recent years, many of which involved black or latino civilians.


“Video images of the incident in the 84th precinct are troubling, and the event is under review by the NYPD and HRA [Human Resources Administration] Police,” NYPD Sgt. Jessica McRorie said in an emailed statement to The New York Times. “This review will include [an] examination of all available video of the incident.”

McRorie claimed that HRA officers brought Headley to the floor when she refused to leave the premises, after which the NYPD officers attempted to arrest her.

Nyashia Ferguson, who filmed the incident, disputes the police account of events, claiming the officer who aimed the stun gun at bystanders was the one who brought Headley to the ground.

Also on rt.com
‘I kicked him like there was no f**king tomorrow’: Cops joke about brutality in bodycam VIDEO


“The baby was screaming for his life,” Ferguson, who was there with her 7-month-old daughter said. “The lady was begging for them to get off of her. I was scared.”

The incident, footage of which has been viewed over 200,000 times since it was posted on Friday, has received condemnation from City Council Speaker Corey Johnson and other New York politicians.

This is unacceptable, appalling and heart breaking.

I’d like to understand what transpired and how these officers or the NYPD justifies this.

Being poor is not a crime.

The actions of the officers in this video are appalling & contemptible. There must be a full investigation & the results made public. No mother should have to experience the trauma & humiliation we all witnessed in this video.https://t.co/UU97MLJ5Pt