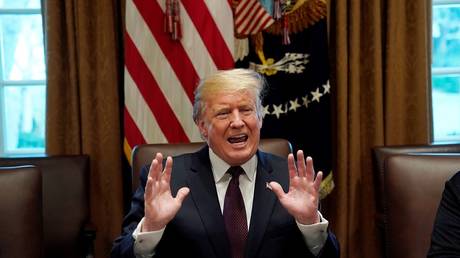 US President Donald Trump said he was looking at “alternative” ways to deliver his annual State of the Union address to Congress, after House Speaker Nancy Pelosi said the Democrat-led body would not invite him to the Capitol.

“The State of the Union has been cancelled by Nancy Pelosi because she doesn’t want to hear the truth,” Trump told reporters at the White House on Wednesday afternoon, following a meeting about border security. “She’s afraid of the truth and the super-left Democrats, the radical Democrats. What’s going on in that party is shocking.”

He described Pelosi’s letter – informing him that the House would not vote to permit him to speak on the floor until the government reopens – as “a disgrace” and “a great blotch on the incredible country that we all love.”

Earlier in the day, Trump sent a letter to Pelosi (D-California), informing her that since the security concerns she had raised about the speech were resolved by the Secret Service, he would be showing up as originally scheduled on January 29. Within hours, she responded that the House “will not consider” a vote on inviting him until the government is reopened.

Also on rt.com
Trump to Pelosi: Ready or not, State of the Union is happening ‘on time & on location’


The partial government shutdown, now on Day 33, is the longest in US history. It began after Democrats in the Senate blocked the bill approved before Christmas by the Republican-majority House that would have funded a border wall to the tune of $5.6 billion. Pelosi took over as speaker on January 3, and vowed “never” to approve any money for a border wall, which she has called immoral.

Trump told reporters he was looking for alternative ways to deliver the speech, without offering details. Some have already suggested the president should speak at a campaign-style rally on the US-Mexican border.

Pelosi just issued another letter, this time saying no State of the Union until the government reopens…

You know what that means?

Looking forward to Trump’s remote State of the Union address from the Southern Border. pic.twitter.com/S7CTLgY8wI