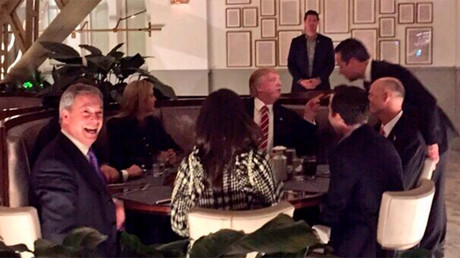 Former UKIP leader Nigel Farage dined with President Donald Trump at his Washington hotel on Saturday, although the Eurosceptic is not thought to have been invited to the meal.

Perhaps unsurprisingly, Farage’s tweet boasting about the dinner was met by mockery online.

According to Johnson, Farage joined the dinner at the last minute, and had not been invited beforehand.

Two things:
1. Farage was not invited to this dinner. Squeezed in at last second
2. Sec. State Tillerson is dining w/wife alone across room

@bennyjohnson Farage. The party guest nobody really wants but for some reason have to tolerate

@JamieRoss7 He looks and is the definitive hanger on whose only job is to grin inanely at every camera.

Farage was in the US for the Conservative Political Action Conference (CPAC), where he delivered a speech on Brexit.

“In 2016, we witnessed the beginning of a global political revolution, and it’s one that is not going to stop. It’s going to roll out all over the world,” he said at the event.

Many social media users weren’t pleased that Farage – who remains a European Member of Parliament despite campaigning for Brexit and whose former UKIP party suffered losses in UK elections – has access to the president.

Farage was one of the first foreign politicians to meet with Trump after his election victory in November. The president even suggested that Farage could be the UK’s ambassador to the US, an idea that UK Prime Minister Theresa May quickly quashed.

Thank you Sir Farage for all you have done for Britain. 🙏 You are the official UK embassador in our eyes.

@dennis20159@EdSkipper Yes, you’re right. Farage is a lying, low-rent snake. Most in the UK think he’s a total idiot.

The White House press pool isn’t being allowed into Trump’s hotel, which is leased to DJT by the federal government.