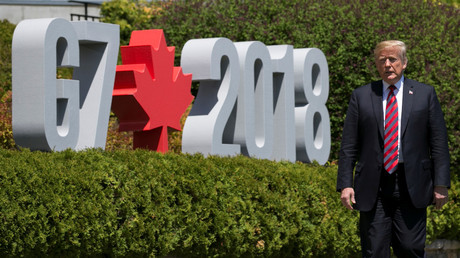 The world has seen increasingly tough talk between G7 leaders and Trump, who seemed to show disrespect towards the group. But did he actually fail the summit in Canada? RT takes a closer look at the feuds gripping the G7.

Divisions between US President Donald Trump and the six other leaders of G7 countries arose during the first day of their summit in Quebec, Canada. Upon arriving, Trump surprisingly called for Russia to be brought back into the G7 and the controversial decision the global body made in 2014 to be reversed.

Later on, it emerged that a meeting between Trump and UK Prime Minister Theresa May will not take place, though meetings between the UK and US leaders were common before he took office. Adding even more tension to the atmosphere, the White House announced that Trump would cut his visit short by one day to arrive early in Singapore for milestone talks with North Korean leader Kim Jong-un.

Prior to the meeting, the firebrand American president accused his counterparts of taking advantage of the US on trade, vowing to “straighten it out.” In a series of tweets, Trump said other G7 nations are hitting the US with “massive tariffs,” hurting the economy.

Trump’s G7 allies did not mince words either. French President Emmanuel Macron said the group will go on despite Trump’s unorthodox behavior. “Maybe the American President doesn’t mind being isolated today, but we also don’t mind being six if need be.”

“We have troubles with not only tariffs, we have troubles with almost every subject,” Willy Wimmer, former vice chairman of the OSCE Parliamentary Assembly, told RT. “And I think the rift between Brussels and Washington, the European Union and the United States, will become bigger and bigger.”