New York Governor Andrew Cuomo faced off against primary challenger Cynthia Nixon in their only head-to-head debate last night – but in the midst of political jabs and fiery exchanges, there was one comment that puzzled people.

The exchange between the two Democrats over how to fix New York’s flailing subway system got so heated, they started interrupting one another. This was when Cuomo, who is seeking a third term as the state’s governor, appeared to inadvertently admit he was lying.

“Can you stop interrupting?” Cuomo asked, responding to an unwelcome interjection from Nixon, to which she shot back: “Can you stop lying?” Cuomo responded: “As soon as you do.”

Cuomo’s critics and Nixon’s supporters immediately seized on the comment as one of the more revealing moments of the hour-long debate.

Andrew Cuomo: “Excuse me, can you stop interuppting?”

Cynthia Nixon: “Can you stop lying?”

Andrew Cuomo: “As soon as you do.”

Did he just own himself by admitting he’s been lying? 😂#NYGovDebate

With just two weeks to go until the primary election on September 13, Nixon faces a huge uphill battle, with some estimates suggesting that she is more than 30 points behind Cuomo in the polls.

This might not be a lost cause just yet, however, with another New York primary serving as example – that of Democratic socialist Alexandria Ocasio-Cortez. She managed to pull off a huge upset victory over 10-term incumbent Democrat Joe Crowley in June despite trailing 36 points behind Crowley in the polls three weeks out from voting day. Ocasio-Cortez ended up beating Crowley by 15 points. Now Nixon is hoping to pull off a similar victory.

What is strange about the race is that Nixon is the kind of candidate that the Democratic party typically likes to put forward; her victory would give New York its first female and LGBT governor. Yet, despite the fact that she espouses policies popular with many voters these days, the odds are stacked heavily against her. 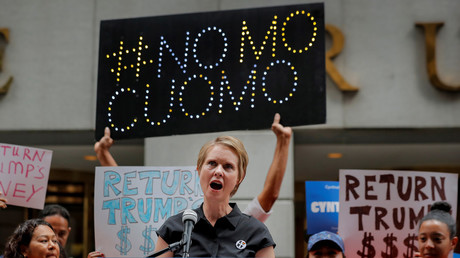 While Cuomo boasts a war chest of more than $24 million, Nixon, who has typically been taking smaller-dollar donations (along with some more significant injections of cash from wealthy supporters in the entertainment industry), can’t afford to run TV ads for her campaign and has been focusing her efforts on online outreach.

Cuomo also enjoys the support of the entire Democratic establishment. Then again, so did Crowley and it didn’t matter when voters in New York’s 14th district were given the choice between an establishment incumbent and a fresh-faced progressive candidate. The difference here is, it’s not just one very progressive and ethnically diverse district voting, it’s the whole state.

Ocasio-Cortez is not the only political newcomer giving the Nixon team hope. Another progressive Democrat, Tallahassee Mayor Andrew Gillum, running for Florida governor, just pulled off a similar primary upset victory against a slew of Democratic rivals, shocking the Florida establishment. Polls had put Gillum at just 16 percent before the vote – but he won more than 34 percent at the ballot box.

Gillum, a Bernie Sanders-endorsed candidate, was the only leading Democrat in a crowded field who supported a “Medicare-for-all” single-payer healthcare system, something which Nixon has also endorsed and which more traditional Democrats (who often take money from healthcare lobbyists) have been reluctant to put their support behind, despite 70 percent support for the policy among Americans, according to a recent survey.

The progressive movement is transforming the country – and he proved that again tonight.

Gillum ran on Medicare for All, Legalizing Marijuana, #AbolishICE & more.

Nixon has challenged Cuomo from the left in a similar way, accusing him multiple times during the campaign of being “corrupt,” a “corporate democrat” and an “Albany insider” who has not served the state well. She has also backed policies like the legalization of marijuana and the abolition of the Immigration and Customs Enforcement (ICE) agency, as Ocasio-Cortez and Gillum did.