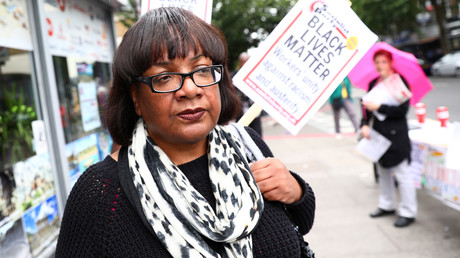 Labour MP Diane Abbott has defended her use of a mock picture depicting an Israeli jet bombing Iran in a tweet regarding Syrian airstrikes, calling her critics “pathetic.”

The shadow home secretary took to Twitter on Monday to denounce the UK government’s decision to carry out an airstrike near Homs without Parliament’s approval.

In the tweet, Abbott said it was shocking to hear a Conservative Party politician support bypassing the UK Parliament with regards to military action in Syria. Abbott’s message, about Saturday morning’s coalition strikes against the Assad regime, included an image of a fighter jet bombing a town in daylight.

Shocking to hear Tory minister on @BBCr4today claim that you can’t allow Parliament to vote on war because that would be to “outsource the decision to people who don’t have all the info” Do these people understand what parliamentary democracy is? pic.twitter.com/1sMxSJb48G

However, the picture has now been shown to be a composite image of Israeli F-15 aircraft blowing up buildings in Tehran. Indeed, the bombing never actually happened and it is a photoshopped picture, reportedly created by the military blog, The Aviationist.

Why are you posting a mocked up pic of an Israeli jet bombing Iran? It’s disingenuous and downright inflammatory.

I managed to get some pictures of the actual fighting. Thought you might want to tweet it out. These b*stards need exposing. pic.twitter.com/SU8bwSg644

Your choice of picture is neither trivial nor accidental. You aimed to stoke visually the myth that this is action is comparable to Iraq. You belong in the student union world of self-righteous posturing, not in the grown up world of parliament.

A number Twitter denizens have since piled on to criticize and even mock the Labour MP’s choice of imagery. Abbott has since hit out at her critics, labelling them “pathetic.”

Apparently, my use of this pic is ‘important news’. Yes, UK goes to war without UN approval or even parliamentary debate. But the most important news is what pics I use in a tweet. Pathetic.

“Apparently my use of this pic is ‘important news’. Yes, UK goes to war without UN approval or even parliamentary debate. But the most important news is what pics I use in a tweet. Pathetic,” she said on Twitter.