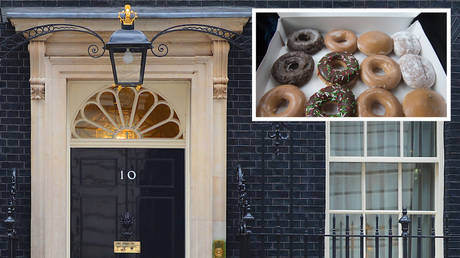 Ahead of one of the most important parliamentary votes in recent British history, an armed police officer was spotted carrying precious cargo on Downing Street: massive boxes of Krispy Kreme donuts.

As debate rages in the House of Commons ahead of the vote on Theresa May’s draft Brexit deal, some of the capital’s bakers were working tirelessly to ensure that the prime minister and her aides didn’t go hungry before the long-anticipated and oft-derided vote on the widely panned withdrawal plan; anything to liven up proceedings, it seems.

Given that the entire Brexit ordeal has become a slog for politicians, journalists and the public, the unusual sight of a heavily armed police officer bringing donuts to the prime minister’s residence brought some levity and mirth to the otherwise gloomy proceedings of the day.

Preparations for a no deal, no food Brexit are well underway. The last box of doughnuts available in the UK has arrived in Downing Street, under armed guard. The minister for hunger will keep them locked away in a vault. #BrexitVotepic.twitter.com/o55mpPt4Df

“we need a snack that represents brexit…” “what about doughnuts? They lack real substance have gaping holes and never deliver quite what you hoped.”

Speculation was rife on Twitter as to whether the Krispy Kreme boxes and bag were all an elaborate ruse.

donut vote for the the deal

The donuts most certainly weren’t for Prime Minister May herself, given that she is a type-1 diabetic, though if Tuesday’s front pages are to be believed, she may need something to take the edge off the impending vote, one way or another.

Comparisons were immediately drawn between May’s last ditch morale-boosting effort and US President Donald Trump’s McFeast held at the White House on Monday; because nothing says “presidential” quite like lukewarm Big Macs and stale fries.