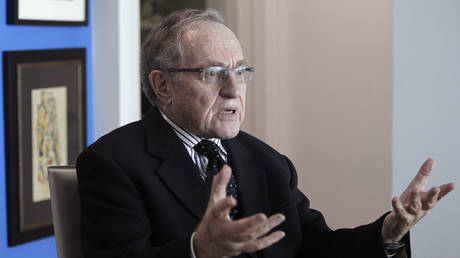 Harvard law professor Alan Dershowitz has sharply criticized Robert Mueller, saying the special counsel was right about collusion but abdicated his responsibility by not making a clear call on obstruction of justice in his probe.

The Harvard Law School Professor Emeritus argues that it is the job of a prosecutor to make decisions, more specifically to level charges against subjects of investigations if the evidence supports such a move.

Also on rt.com
‘Complete & total exoneration!’ Trump says it’s a shame US had to go through Mueller’s witch hunt


Dershowitz likened the Mueller investigation to that of former FBI Director James Comey’s probe into Hillary Clinton’s private email server, in that neither reached a satisfactory conclusion one way or the other and seemingly opted to sit on the fence, despite the intense scrutiny both domestically and internationally.

In both cases, partisans on either side of the aisle were able to cling to tenuous arguments and maintain some glimmer of hope, however faint, that they might someday be vindicated.

Republicans are feverishly celebrating the decision made by Barr and Deputy Attorney Rod Rosenstein not to indict President Trump or his family for obstruction of justice and potential collusion with Russia.


Meanwhile, the lack of a definitive conclusion to the investigation has spurred Democrats, like Rep. Jerrod Nadler of New York, to call for both Special Counsel Mueller and the evidence he gathered throughout the course of his investigation to be subpoenaed.

For this exact reason, Dershowitz advocates that prosecutors should remain silent on they decisions not to indict lest their statements be weaponized by partisans on both sides of a political battle.

Dershowitz acknowledges that, in the case of special counsels, regulations do not require the attorney general to weigh in on the subjects of the investigation, or to publish the evidence contained therein, merely to announce the findings and recommendations on whether to indict or not.


Furthermore, Mueller’s reluctance to engage with the subject matter of the investigation places Barr in the unenviable position of deciding whether to redact the final report or not.

With the media and the Democrats baying for blood, and the latter already threatening to subpoena the information anyway, Barr may feel pressured into releasing the full report as is.

While Dershowitz lauds the Mueller probe for, as he puts it, coming “to the right conclusion about Russia – there was no collusion between Trump, his campaign or associates with Russia to win the election,” he also laments the unsatisfactory conclusion.

“Mueller seems to have conducted a generally fair investigation. But he failed to come to a clear decision about obstruction of justice. That was his job and he should have done it,” the legal expert concludes.