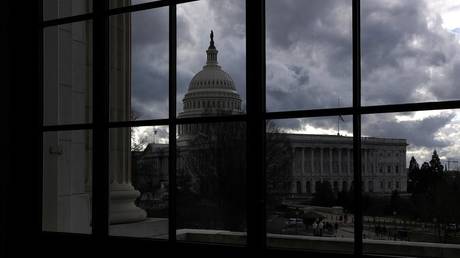 With Democrats determined to vote against any funding for President Donald Trump’s border wall proposal and Trump refusing to sign a bill without it, the US government is heading for a shutdown right before Christmas.

Congress has until midnight on Friday to approve funding to keep the US government going. The Senate and the House initially approved a proposal, but Trump threatened to veto it because it contained no allocations for border security. The House then passed an amended continuing resolution, 217-185, but the Senate still needs to do so – and Minority Leader Chuck Schumer (D-New York) vowed Trump will “never” get funding for the wall.

The Democrats now own the shutdown!

Democrats point the finger of blame at Trump.

Why a government shutdown would be a #TrumpShutdown:

… And, oh yeah, *President Trump said he’d be “proud” to shut down the government.* pic.twitter.com/1EcHhr6BJQ

Senate Republicans argue the Democrats were once in favor of securing the border, and suggest they are being petulant because they hate Trump.

Cable news pundits have joined the Democrats’ chorus of condemnations, bemoaning the fact that some 800,000 federal employees won’t be getting their paychecks for Christmas, which the US observes next Tuesday.

It is unclear what effect the shutdown will have, however, as the federal government is already scheduled to close for Monday and Tuesday, due to the holiday. Federal employees who are deemed essential usually work through the shutdown and get paid whenever the impasse is resolved.

And Americans don’t need to worry about  the Washington grinches canceling Christmas, the North American Aerospace Defense Command (NORAD) tweeted on Friday: their regular operation to track Santa Claus as he delivers presents will proceed as normal.

In the event of a government shutdown, NORAD will continue with its 63-year tradition of NORAD Tracks Santa on Dec. 24. Military personnel who conduct NORAD Tracks Santa are supported by approximately 1,500 volunteers who make the program possible each and every year. pic.twitter.com/fY0oyjrdDc